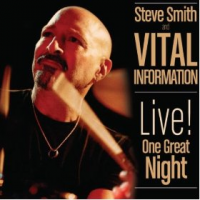 Drummer Steve Smith means different things to different people. Arena rockers will always think of Smith as the rhythmic force that drove Journey's hits, while straight ahead jazz fans appreciate him as a keeper-of-the-flame, honoring the great drummers of the past through his work with his own Jazz Legacy group. Others rightly view him as a clinician and educator par excellence, sharing his extensive knowledge in person or through his educational DVDs, and yet another segment of people see him as a studio ace who takes care of business for artists looking to house their music in an original sounding undercarriage.

While the many faces of Steve Smith have allowed him to be all of this and more, his most consistent artistic persona has been that of fusion pusher. Smith has been espousing the virtues of fusion with Vital Information for three decades and, while the personnel has changed over the years, the overarching esthetic remains the same.

The edition of Vital Information featured on Live! One Great Night, takes the original, chops-heavy, rock-jazz-funk fusion template of yesteryear and builds on it, adding Indian structures into the architecture of the music. Smith's post-millennial fascination with South Indian vocal percussion—a.k.a. konnakol—seeps into the mix here, but it doesn't change the basic sound of the group; it simply adds another flavor to the stew. This ideal proves to be most intriguing on "Interwoven Rhythms-Synchronous," which comes off like wordless Indo-rap over a funky foundation.

All of the standard Vital Information trademarks and more come into focus at different times. Odd meters ("Seven And A Half"), slick and funky grooves ("Cat Walk"), classic organ jazz allusions ("Jimmy Jive"), metric sleight of hand, time twisting antics, mind blowing drum solos and fast-fingered displays of technique from the strings and keys are all part of the package. While the band's reputation as a high energy outfit remains intact during this program, they're more than capable of finding success when they dial things down. The bonus DVD includes a gorgeous number with Mediterranean underpinnings ("Positano"), courtesy of Tom Coster's accordion and Vinny Valentino's clean-toned guitar work, that proves this point.

The majority of the material featured here comes from Come On In (Tone Center, 2004) and Vitalization (Hudson/Mascot Records, 2007), so it was fresh in the minds of these four men when they dropped in at The Mobius—a now-defunct club in Ashland Oregon—in the fall of 2007. They were near the tail end of a world tour, so they were operating as a well-oiled machine, and that comes through loud and clear on this live recording from one of the last great fusion bands standing.