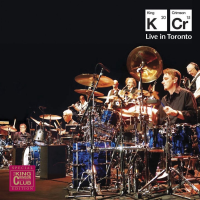 "The best live albums are the ones that make you glad they were recorded while simultaneously regretting you couldn't have been in the venue on the night." So writes Declan Colgan, president of Panegyric Records—the label responsible for, amongst other things, King Crimson's extensive 40th Anniversary reissue series of its initial run of studio and live albums, remixed by Steven Wilson or Jakko M. Jakszyk—in his liner notes to Live in Toronto: Queen Elizabeth Theatre, November 20, 2015, the full-concert release for which fans of the current seven-piece King Crimson have been eagerly awaiting. Listening to Live in Toronto, the group's second live album after the 2015's 40-minute teaser, Live at the Orpheum (Panegyric), it's clear that truer words have never been spoken.

Crimson co-founder and only remaining original member of the lineup that released In the Court of the Crimson King (Panegyric) forty-seven years ago in 1969, guitarist/keyboardist Robert Fripp, has often referred to studio recordings as "love letters" and live recordings as "hot dates." In a nutshell, Live in Toronto is one heckuva hot date, even surpassing the four stellar shows already experienced, two each, in San Francisco (2014) and Montreal (2015).

Live at the Orpheum's seven tracks were carefully mixed (and in some cases, edited) by Jakszyk, representing a more produced taste of what the current Crimson's three-drummer frontline, twin-guitar/bass/reeds and woodwind backline is all about, culled largely from one show during its inaugural Fall, 2014 US tour. Live in Toronto, by comparison, is a warts-and-all "official bootleg" recording of the entire show—available initially as a download from DGM Live but subsequently issued in hard CD form. There are no edits at all, other than to reduce the time between the pre-recorded announcement that commenced all shows—asking, with some levity but serious intent, that the audience experience the show through their eyes and ears rather than through their smartphones and tablets—and when bassist/stick player Tony Levin and woodwind/reed multi-instrumentalist Mel Collins came onstage to engage in some brief improvisational interplay over Fripp's "Threshold Soundscape."

It's a gentle segue that also includes Mastelotto's sample of the "hidden" track on 1971's Islands (Panegyric)—where Fripp counts in the string players in waltz time—before drummers Pat Mastelotto, Bill Rieflin Gavin Harrison begin the gamelan-like introduction to "Larks' Tongues in Aspic: Part One," from Larks' Tongues in Aspic (Panegyric, 1973), in a completely different time signature and the rest of the group then joins in to turn it into a pedal-to-the-metal version, the likes of which has truly never been heard live before, even back in late 1972, when the then-quintet version of Crimson first began performing it live.

While the setlist doesn't include everything in the group's repertoire by Fall, 2015, when Crimson hit Canada for a series of 11 dates in six cities, it's as good a representation of a typical setlist as any, where—with a few additional songs not played, including two from the "Crimson ProjeKct" A Scarcity of Miracles (Panegyric, 2009), "One More Red Nightmare," from Red (Panegyric, 1975) and the new significantly altered 7/4 blues, "Suitable Grounds For The Blues," to augment the two additional new pieces that do appear in the Toronto setlist, the joined-at-the-hip "Radical Action (To Unseat the Hold of Monkey Mind)" and "Meltdown"—the group was able to play two or three nights in the same city and venue and, if not deliver completely different sets, at least be able to mix things up enough to make it even more worthwhile for those who decided to catch more than one show.

There remains considerable controversy amongst fans over the need/relevance of three drummers and the value of placing them in the unusual frontline position, but with the three drummers clearly delineated in the mix as they were live—Mastelotto, stage right, so coming from the left speaker; Rieflin, who also played keyboards, center stage; and Gavin Harrison, who wrote all the drum arrangements, stage left, and so in the right speaker—it's hard not to appreciate exactly why Fripp decided to go with this unconventional lineup, one where there is no frontman and, instead, nobody shines and everybody shines. There are times when the three drummers pass parts around like a tag-team; others where they coalesce into a 12-limbed single instrument of thunderous power; and still others where, with electronics also playing a part in the proceedings, each drummer has a clearly defined and different role. What makes this percussion trio so exciting—and so important to the current Crim's complexion—is how it manages to work to script while, at the same time, introducing variations that trio not only lift Harrison's arrangements off the page and bring them to life, but make every performance a different experience...Live in Toronto included.

This is a group that rarely engages in mere "look at me" pyrotechnics—though pyrotechnics absolutely do fly across and around the stage throughout the set—everyone finds their way to a feature spot, whether it's Fripp's extended solo on a searing version of Larks' Tongues in Aspic's "Easy Money" (along with Jakszyk's wordless vocal improvs); Harrison's mind boggling drum solo on "21st Century Schizoid Man," where he moves effortlessly from gamelan-informed interludes to potent light-speed passages that seem impossible for a mere four limbs to execute; or Collins' flute solo that, supplanting original violinist David Cross' a cappella passage on "LTIA: Part One," moves from soul jazz-tinged lines to chromatic passages and even a bit of humor by briefly referencing both the Canadian ("Oh, Canada") and French ("La Marseillaise") National Anthems.

With Jakszyk handling the vocals, this is the first time in decades where it's been possible to include certain songs in the repertoire, and it's hard to think of a better choice; granted, previous Crimsons have more often than not been about moving forward with new material along with new concepts, and while this Crimson is irrefutably a new concept, the new material has been relatively slow in coming from this incarnation, beyond a series of percussion trios introduced in 2014, including "The Hell Hounds of Krim" and "Banshee Legs Bell Hassle," that were, more often than not, introductions to other pieces.

Still, the opportunity to hear songs like the haunting "Epitaph" and even more powerful, mellotron-driven title track from In the Court of the Crimson King, as well as the thundering attack of the jazzified "Pictures of a City" from In the Wake of Poseidon (Panegyric, 1970)—a healthy bunch that, also including "Easy Money," had yet to make it into the repertoire in 2014—have been like manna from heaven for longtime Crimheads who never imagined that they'd hear these songs performed live. In fact, Live in Toronto includes material from almost every incarnation of Crimson, barring the interim group that recorded Lizard and the '80s quartet responsible for Discipline (Panegyric, 1981), Beat (Panegyric, 1982) and Three of a Perfect Pair (Panegyric, 1983). For the first time in Crimson history, there's also a band with sufficient instrumentation to play many of the parts originally overdubbed on the studio albums but impossible to play live, as well as introducing new variations, like Jakszyk harmonizing with Fripp's well-known lines.

It's also the first time that Crimson has had a reed/woodwind player since early 1972, and with the return of that very player, Mel Collins, the current group now also has members crossing the fullest breadth of the band's history, with Levin a 36-year veteran; Harrison—who only played on the brief 2008 twin-drummer quintet tour with longtime guitarist/vocalist Adrian Belew, Fripp, Levin and Mastelotto—a relative newcomer, and Rieflin, brand new to Crimson but who shares history with Fripp in the 2006 improv group, Slow Music Project. Jakszyk may also be new to Crimson but, as co-conspirator with Fripp behind A Scarcity of Miracles and as guitarist/vocalist with the largely Crimson alum-driven 21st Century Schizoid Band, he's ideally suited—both as a singer and a guitarist with no shortage of talent who can, in addition to contributing his own ideas to the mix, also play scripted parts no longer executable by Fripp since he switched tunings many years ago.

Hearing music from In the Court of the Crimson King, In the Wake of Poseidon (Panegyric, 1970), Islands (Panegyric, 1971)—in particular the vocal and saxophone feature "The Letters," which literally moves from a whisper to a scream; and the instrumental "Sailor's Tale" that remains one of the group's best-loved pieces, with Fripp's warped, faux-banjo chordal solo—Larks Tongues in Aspic, Red (sadly, no "One More Red Nightmare" this time, but fans are encouraged to refer to Live at the Orpheum to hear how well Jakszyk delivers), Thrak (Panegyric, 1995), the title track of the unjustly overlooked The ConstruKction of Light (Virgin, 1999) and the group's most recent studio record, The Power to Believe (Sanctuary, 2003), it would be easy to call this incarnation of Crimson a tribute band. But with the triple drum set arrangements, twin guitars, reeds and woodwinds, and bass and stick, all played by top-drawer musicians capable of respecting every song's formal construction while, at the same time, introducing interpretive variations and impressive solos, this is no tribute band; this is a Crimson which, for the first time, looks across its broadest history while, at the same time, bringing the music firmly into the 21st Century.

And there's even better news: this isn't the end. According to David Singleton, in liners he shares with Colgan, a full live album, "together with complete concert footage," is due in the fall of 2016, so even the warts-and-all "official bootleg" style release of Live in Toronto is, like Live at the Orpheum, an interim issue. Still, if Live at the Orpheum whet the taste, then the thrilling, dramatic, powerful and, at times, even delicate Live in Toronto: Queen Elizabeth Theatre, November 20, 2015 is an even more satisfying experience, rendering what's to come this fall all the more eagerly anticipated.