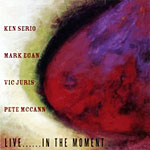 It's not known who attended Ken Serio's concert at Trumpets Jazz club in Montclair, New Jersey on June 21, 2007, but one thing's for sure; they definitely got a bang for their buck with Live.... In The Moment. Serio, a veteran drummer, has an impressive résumé and four previous recordings as a leader. For this recording he recruited a few jazz heavies with whom he's performed—guitarists Vic Juris, Pete McCann, and renowned fretless bassist Mark Egan.

This gathering of mighty axe players was fruitful, resulting in a two CD recording of uncut performing. The combination of Juris (left channel) and McCann (right channel) is golden, two different yet complimentary styles, trading solos and comps, showing why they're at the top of their games. McCann, the younger of the two, sounds more aggressive, using an array of harder edged synth-effects on "3 Way Mirror" and "The Return Of Doctor Zero." But Juris—a leader and longtime collaborator with saxophonist Dave Liebman—has a few tricks up his own sleeve with masterful licks on the blues soaked "Tomorrow's Another Day," and some Scofield-esque voicings on the funky jam "Bean Town."

Serio and Egan provide more than just the rhythmic underpinning. Serio's trap-work is crisp throughout, delivering the sticks on "Frixin!," where he solos hot and swings hard with Egan's walking bass. Egan's elastic sound is in his usual top form, injecting whatever mood is needed along with his unique electric solos. Their ethereal duo on "Belluno Skies" sets up one of the highlights, "Willamette Valley," a tune distinguished by Serio playing Indian tablas, Juris on electric, McCann on acoustic, and Egan guiding the mysterious groove.

You might think that this as your run-of-the mill fusion recording, but the band covers a lot of diverse material. There's everything from retro Space Age sound effects ("Nigel's Dance") to Spaghetti Western blues ("Big Blue Cars"), and a few surprises such as the American folk tune "Shenandoah" and the Ron Carter/ Miles Davis classic "Eighty-One."

There's a lot packed into these nineteen tracks, with over 139 minutes of music, and if you can't listen to all of it in a couple of sets like the folks at Trumpets, there's still a wealth of good music to return to.