By John Stevenson
July 1, 2001
Sign in to view read count 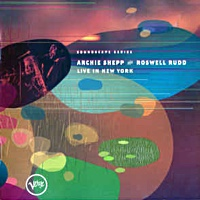 The year was 1994. The venue: the Eilat Red Sea Jazz Festival. Hundreds of sweltering Jazz aficionados waited in a huge converted cargo shed to witness reedman Archie Shepp and his quartet—a marquee coup for the Israeli festival. When Shepp swaggered onto the stage, the more discerning members of the audience (including this reviewer) could scarcely conceal their disappointment. Here was the 1960s hero of radical Jazz conservatively bedecked in two—piece gray suit and tie. He might as well have emerged from Wall Street. More disconcerting was that this aging maestro and his group played mostly standards, and Shepp's vocals were not always up to the task. With a lineup that included a shaky—looking but strong—sounding Horace Parlan on piano, one couldn't help but be dismayed.

On Roswell Rudd and Archie Shepp—Live in New York, Shepp (playing tenor sax, piano and crooning) is in top avant-garde form in the company of trombone titans Roswell Rudd and Grachan Moncur III, percussionist extraordinaire Andrew Cyrille and ever—surprising bassist Reggie Workman. The CD sizzles with excitement. The one downer—as odd as a seven—dollar bill—is the inclusion of Amiri Baraka ("We Are the Blues") with a hideously boring poem about the blues.

One of the most endearing aspects of this collaboration—recorded live at the Big Apple's Jazz Standard last September—is the seamless way in which Rudd and Shepp move between the orbits of furious abandon ("Acute Motelitis") and engagingly mellow pieces ("Steam," "Déjà Vu"). The Paris—based saxophonist's deft and delicate piano playing and crooning is a major highlight of this disc. Shepp shines on saxophone too, with his trademark vibrato and lyrically sculpured phrasing.

The influence of Herbie Nichols and Elmo Hope overwhelms but never threatens to suffocate the proceedings. Tunes like "Acute Motelitis," "Ujamma" and "Hope No. 2" bear out this tendency. Located somewhere between the stylings of Bud Powell and Thelonious Monk, these numbers bristle with their own unique harmonic sense.

Reggie Workman has been such a ubiquitous presence in Jazz circles for nearly fifty years that one could say he "hides in plain sight." From straight-ahead blues to avant-garde situations, this creative bassist anchors this particular live session with great flair. Ditto Andrew Cyrille who has been grossly overlooked in terms of his contribution to the percussive lexicon. His sheer prowess in punctuating and parsing the pulse of each of the compositions on Live in New York is breathtaking. For the more discerning Jazz aficionado, this new Rudd / Shepp collaboration will not disappoint.

I am a father, husband and lover of art and culture, with a fascination for jazz.