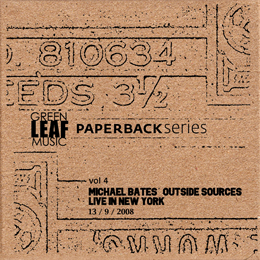 Prevalent in the musical ethic of Michael Bates is a masterful balance of instrumental and compositional elements. Live in New York is Bates' group Outside Sources—Russ Johnson (trumpet), Quinsin Nachoff (saxophone and clarinet) and drummer Jeff Davis —documented at a Fall 2008 Cornelia Street Café gig.

The initial snap of the snare on the opening "Bloodletting," bolstered by the low resonance of the bass, is immediately engaging. Nachoff's searing buzz that follows quickly transforms into tight melody with a definite resolution. This introduction establishes the aesthetic for the rest of the album: strong writing with particular emphasis on harmonic unisons between the frontline instruments.

In the set closer "Damasa," Nachoff's energy and sensitivity to dramatic change shines brightly; his adept work on the clarinet is also exemplary in the preceding "Poor Mans Cure." Johnson is his usual precise self throughout. Bates' solo introduction to "Simple Interlude" reveals an innate lyricism and Davis' awareness of the moment becomes the fulcrum between folk-like themes and open-ended exploration.

The tempos and rhythms expand and contract within tracks and from piece to piece. At times, the music alludes to Klezmer stylization ("Poor Mans Cure") and more than once, a sound like that of a tuba is created through the bass and trumpet alignment ("The Russian School"). But never once does the music become trapped; it springs eternal.