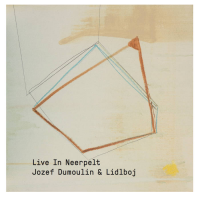 Belgian keyboardist Jozef Dumoulin incorporates some oddball and magical innuendoes with his Fender Rhodes and electronics implementations, and is an inventive improviser who comingles a flock of emotive voicings into his work. On this outing he leads an international outfit, featuring Clean Feed Records artist Lynn Cassiers who harmonizes with the instrumentalists via her angelic vocals, while also incorporating electronics into the grand schema, following suit with her band-mates.

The musicians project lucid imagery throughout this live offering recorded in 2011. Cassier's whispery voice is a harmonious instrument whether she's layering word or sounds over the top or when circumnavigating the quintet's subtle EFX parts and unison choruses. And even though many of the leader's comps are semi-structured, experimental or uniform, the band radiates fervor and affability. However, "August 22nd" features a daunting mid-tempo groove, amped by baritone saxophonist Bo Van der Werf's intense and deterministic soloing atop a backbeat, coupled with Dumoulin's silvery keys and resonating contrasts.

"Ik Roep" sounds like a detuned guitar is formulating a loose theme, but in all likelihood it is probably synths, or something of that nature, shifting above Dries Laheye's ominous bass patterns. Here, drummer Eric Thielemans lays down the restrained pulse as the ensemble oscillates the current from fast to slow amid offbeat chords and a changeable flow. It's sort of like a bizarre hallucination, complete with haunting motifs, ostinato phrasings and sinister undertones. Regardless, the musicians execute amenable inner-workings and don't overstate anything, which is a trait that heightens their mode of pursuing uncannily accessible song-forms.

On "Van Vlaanderen" their use of electronics casts an interstellar soundscape with strange noises and short-circuited interference, as they gradually raise the pitch, abetted by corpulent synth bass lines and tense sax and voice parts. Indeed, the artists' insightful electronics treatments and quirky theme-building methods, coupled with free jazz improvisation, sporadic detours and sultry melodic content, are some of the components translating into a standout session.