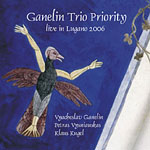 Slava Ganelin himself, the founder and only original member of the fabled Soviet improvising trio, began the proceedings with a piano solo that was authoritative and moving, hovering somewhere between homage and prayer as it slowly built and began to writhe. Eventually, the trio even destroyed its own admittedly permeable boundaries, electronic billows, dual percussion bouts and long swells and fades giving the illusion of many more players and infinitely possible sound worlds. Change was the only constant, the powerful heights majestically roaring, the moments of reflection exuding solitude, sometimes note by preciously disturbing note.

The Polish Not Two label should be thanked profusely for presenting a live document of this fine and animated trio. Recorded in 2006, the live Ganelin sound translates to CD remarkably well; each piece is approximately thirty-eight minutes long and, along with the very faithful recording, gives any interested listener as authentic an experience as possible of the live event.

Additionally, the CD allows for the perusal of every detail, such as the stunning drum/sax duo that opens "Conversation IV." Also, Ganelin's pianism can be appreciated from moment to moment, his attention to dynamics and shading equaled only by his virtuosity. Really though, the recording should be heard in a sitting, experienced as it unfolds, turns back on itself and reopens, transcending history and time as it follows its own inexorable logic. No matter how good their previous recordings seem, this might be the trio's definitive statement, the next best thing to experiencing the group in person.