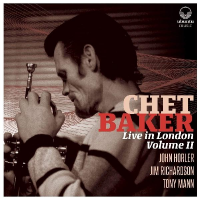 Somewhat incredibly, these sessions from 1983 were recorded on a domestic audio cassette recorder. The John Horler Trio was employed to back Chet Baker on his six consecutive nights at The Canteen in London, a short-lived jazz venue in the heart of the City. Jim Richardson, bassist on these dates, gained Baker's permission to record these sessions and although the tapes were only intended for personal enjoyment, they have now been painstakingly restored for the benefit of everyone.

This is the second volume of Chet Baker Live in London, the first having been released in 2016. Both volumes are packaged in a two CD Digipak format.

On CD 1, from the slightly diffident start of Horace Silver's "Strollin," the set begins to gel with Richie Beirach's tranquil "Broken Wing." But by "My Ideal" Baker delivers his trademark irresistibly limpid vocals followed seamlessly by his warm trumpet solo. However, on Miles Davis's bluesy "Down," Baker's opening solo really starts to cook.

CD 2's opener is Herbie Hancock's timeless "Dolphin Dance," and Baker's performance here epitomises his use of legato phrasing interspersed with long single notes. Baker's relaxed and faintly hypnotic vocals are heard again on "When I Fall In Love" and his instrumental rendition of "Dear Old Stockholm" is equally mesmerising. But his singing on "Just Friends" is teasingly short, soon giving way to more spiralling horn work.

As an archival document signalling a career nearing its tragic end, this double CD, along with its predecessor, is an important testament to an underrated but hugely talented musician.