By Nenad Georgievski
January 11, 2015
Sign in to view read count 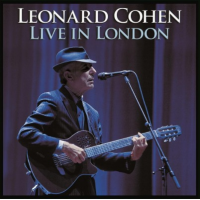 The Live in London LP could have easily been Leonard Cohen's last record and the tour that followed it could have easily been a low key farewell tour. Already at the twilight of his career or at an age when most acts go into retirement, Cohen slowly was secluding himself from recordings, performances or public appearances and instead he lived the life of a monk at a Zen monastery. Due to misfortune concerning his former manager, who bled his bank account dry, Cohen was forced out of his slow retirement into active touring. Instead these unfortunate events simply paved the way for one of the greatest comebacks in recent years.

The management which was hired, helped Cohen to navigate through this storm and the only way for him to help regain some of the stolen finances was to get back to touring. Prior to this Cohen hadn't toured for almost two decades. Not a fan of touring he was also worried that the purity of his songs will be diluted by performances night after night. As any sensible human being he was worried whether there will be an audience eager to hear his songs. Recorded on July 17, 2008 at the O2 Arena in London, England, this recording actually turned out to be a surprising twist of events that opened a totally new chapter in Cohen's career and life. For most acts, a double live album (Live in London was initially released as a double CD/DVD) is only a breathing space between studio works, but for Cohen it was his defining moment that not only saved his career but opened a new and a very exciting chapter in his life. Released for the first time on vinyl, this wonderful and historic performance is spread onto three LPs.

For this live recording he made a selection of well-known songs from various corners of his illustrious career, a sort of career summary, and judging from the audience's reaction, it is evident that Cohen easily establishes a warm and joyful rapport with the people in attendance. This deep emotional connection is felt on each song from a set that captures Cohen and his remarkably gifted band in a full two and a half hour performance in front of an adoring London audience. Starting from the opening "Dance Me to The End of Love" until the tender spiritual "Whither Thou Goest" this collection is full of vigor and spontaneity. The sound of this live recording is so pristine that every detail and nuance can be heard and felt. Such is the sacred ambiance that is ever present at his concerts.

Live in London is a historic document and a stepping stone for his career. His return to the stage and active music life was greeted with great admiration and love. Not only did he return the stolen funds but he earned more than enough. More importantly, he won new audiences and his tours were the highest grossing in recent years. But he didn't stop there. What followed was 5 years of constant touring, two more live recordings and two studio records that are among his career best. His songs of love, death, bruised romance and equivocal cynicism really have influenced generations of artists and people continually, myself including, have gone repeatedly to see the old master perform night after night. Live in London is not simply a souvenir of a tour for fans, but a triumphant concert album that reiterated Leonard Cohen's relevance.

Side A: Dance me to the end of love; The Future; Ain't No Cure For Love; Bird on a Wire; Side B: Everybody Knows; In My Secret Life; Who By Fire; Hey, That's No Way To Say Goodbye; Side C: Anthem; Introduction, Tower of Song; Suzanne; The Gypsy's Wife; Side D: Boogie Street; Hallelujah; Democracy; I'm Your Man; Side E; Recitation W/N.L.; Take This Waltz; So Long, Marianne; First We Take Manhattan; Side F: Sisters of Mercy; If it Be Your Will; Closing Time; I Tried to Leave You; Whither Thou Goest.