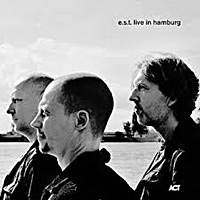 A lot has happened to e.s.t. since its last live album, Live '95 (ACT, 2001). By the time that album hit the streets the trio had already become one of Europe's most successful jazz acts and was beginning to make inroads into the North American market. But e.s.t was still young and hungry when it was recorded back in 1995, having released only When Everyone Has Gone (Dragon, 1993). Live in Hamburg, a full concert recorded in November 2006 shortly after the release of Tuesday Wonderland (ACT, 2006), shows just how far the group has come.

Releasing a live album so dominated by material from Tuesday Wonderland—seven of Live's ten tracks are from that release—might be considered risky or, worse, over-indulgent. But this is jazz, after all, and in most cases the tracks are generously expanded, giving the trio the opportunity to take them to oftentimes unexpected places. It's also a powerhouse performance, providing demonstrable evidence of the advantage with longstanding line-ups. Pianist Esbjöl;rn Svensson, bassist Dan Berglund and drummer Magnus Öström have evolved a unique simpatico, one where it's possible to blend detailed composition with no shortage of group interaction—something that sets it apart, say, from Pat Metheny Group, where there are solos to be had, but the rigors of the material also dictate that the overall structure in performance remains relatively fixed.

e.s.t.'s dalliance with electronics on album doesn't always translate well live, its performance at the 2006 Ottawa Jazz Festival a prime example. Here, however, Svensson largely eschews sonic enhancements, leaving that to Berglund, who has always been best at it. That a double-bassist with no shortage of groove, dexterity and dual-mindedness (a contrapuntal partner to Svensson while, at the same time, a strong rhythm partner for Öström) can also have strong roots in rock music, in particular heavy metal, is what allows him to turn his instrument into a force of nature. His extended solo on a nearly twenty-minute take of the ostensibly funky "Definition of a Dog," from From Gagarin's Point of View (ACT, 1999), becomes a pulsating drums and bass free-for-all before Svensson reins things back in with a solo of characteristic finesse.

Elsewhere, the trio traverses its usual territory, from the haunting elegance of "The Goldhearted Miner" to the more up-tempo "Dolores in a Shoestand," where Berglund mirrors Svensson's left hand with remarkable accuracy before delivering a robust solo that possesses the lyricism of German bassist Eberhard Weber. Svensson's solo builds gradually, with the kind of effortless invention that has kept e.s.t.'s core concept from devolving into predictability.

That Live in Hamburg reveals Berglund's significance, in a configuration normally dominated by piano, does nothing to diminish the inestimable contributions of his trio-mates. Instead, it proves what e.s.t. has asserted all along—that it's a true collective. They may be considerably more successful, but they play like they're still hungry.

CD1: Tuesday Wonderland; The Rube Thing; Where We Used to Live; Eighthundred Streets of Feet; Definition of a Dog. CD2: The Goldhearted Miner; Dolores in a Shoestand; Slipping on the Solid Ground; Goldwrap; Behind the Yashmak.