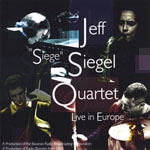 Lindsay's opening "Elvin's Circle" is a moody, propulsive tribute to the great drummer Elvin Jones, with searing and rhythmic playing from its composer. Siegel's "Rag Tag" starts off with a hypnotic, repetitive groove and transitions into two duets, first between the bass and tenor and then piano and drums. The latter is particularly interesting, a lively exchange of rhythmic ideas mixed with Tanksley's quirky harmonic sensibilities. The tune, which was a finalist for the "Best Performance" category in the 2005 International Songwriting competition, closes by returning to the catchy melody.

Tanksley's "Dance in the Question" is a lively, energizing piece of music; the tone Lindsay coaxes from her saxophone is warm and round, yet pointed at the same time. Boller and Siegel make a great rhythm section, managing to be grounded and innovative simultaneously.

Compositions by Siegel make up the second half of the recording. The ballad "Shifting Sands" resonates with contemplative beauty. While the term "melodic drummer" might seem like an abstraction, the description certainly fits Siegel. His phrasing and ideas have such a musical quality to them, they draw the listener inside while supporting the band and propelling the tune forward.

"Stealth" starts off with a sinister-sounding bass line from Boller, and turns into a swinging full-band workout. The closing "Remembering Shirley" honors singer/pianist Shirley Horn and the 10-bar blues is one of the highlights of the recording, a showcase for Tanksley and Lindsay.

Many groups tend to be strong in one or two areas but lacking in others; the musicians might be great soloists but not have strong writing skills. Jeff "Siege" Siegel's quartet manages to be accomplished across the board and Live in Europe is a portrait of a stellar group of musicians and writers at their best.