The Holy Modal Rounders: Live in 1965 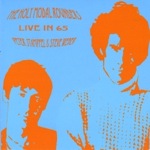 From the Godz to the Fugs to Charles Manson himself, ESP Disk has always had a soft spot for the anarchic side of folk. The Holy Modal Rounders, while perhaps a little less infamous than their label cohorts, were just as wacky and accomplished in their take on the sound.

Despite associations with the Fugs, Michael Hurley and even playwright Sam Shepard, their drummer for a number of years, the Rounders were essentially the project of fiddler and banjoist Peter Stampfel and guitarist Steve Weber. Live in 1965 presents a rare glimpse of the duo together in their prime as they crash their way through sixteen tracks of wild avant-garde folk.

The show opens with "Fishin' Blues," a song about "fishin' and the blues" which consists of the herky rhythm guitar of Weber and the crazed fiddling of Stampfel. Both sing together in gleefully loose phrasings. "Hold the Woodpile Down" is an Uncle Dave Macon tune reconfigured with lyrics from Stamfel, his then-girlfriend Antonia and verses from William Blake. While this may suggest a certain medieval purity favored by the likes of Joan Baez make no mistake; Stampfel's description of the work as a "daisy chain of arcane influence" sums up the crazed nature of the brief romp.

"Random Canyon" is a playful study in word association while "Indian War Whoop," presented here two years before their album of the same title would be released (ESP-Disk, 1967), is exactly what it sounds like—a fairly standard instrumental melody is infringed upon by the two musicians whooping and guffawing over one another.

The duo even cover Johnny Cash's "Going to Memphis," with Cash's baritone vocals replaced by the amateur squealing of the Rounders, turning the work into a near sarcastic homage to the tune's author. "Sugar in the Gourd" sees the duo's chops best represented as the hectic pace of the piece is handled with near flawlessness, even as the two mess up the lyrics halfway through before laughing it off and continuing on their way.

Indeed, the whole set is marked as such. The duo never attempts to remove any of its grit and therefore loses none of the loose and free atmosphere that made this band so fun. It is a smart and silly set from a couple of musicians who—unlike so many of the punk-rockers that they would come to influence—never show even the slightest tinge of pretense in their practice.

About The Holy Modal Rounders