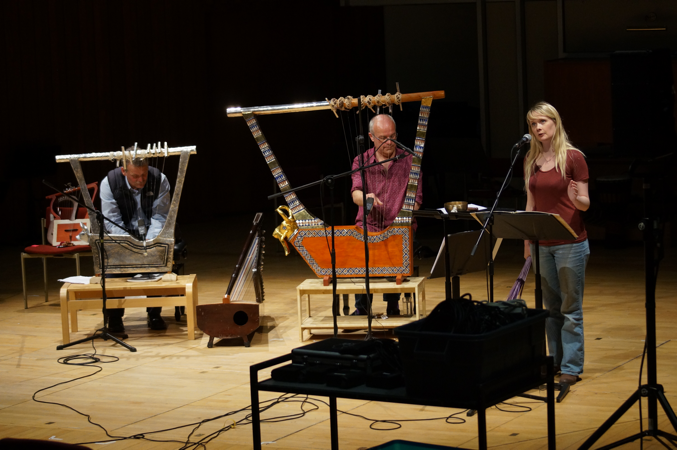 
The University Of York's Spring Festival Of New Music covered a diverse range of fresh sounds, presented in a variety of venues, including two deconsecrated churches. Students from the music department were heavily involved, but there were also visiting composers and performers, helping to probe the fringes of moderne composition, edging into the languages of rock, jazz, improvisation and the imagining of centuries-old ethnic song-forms. This last area of activity was instrumental in opening up the festival, at the University itself, with The Lyre Ensemble dedicating themselves to the rebuilding of ancient harp-like instruments from the world of back-in-the-day (4500 years ago) Babylonian and Sumerian music. Too early even for shellac 78s, this music has to be almost completely fantasised. Not as large a group as their name suggests, a mere threesome inhabited the stage, with two lyre players and a singer.

If a performer wasn't currently involved with the University, then there was a good chance that they studied here in days of yore. Such was the case with singer Stef Conner, who spent a decade "learning to be a musician," as she put it. She was also a member of The Unthanks folk combo. The gold lyre of Ur is the Ensemble's biggest beast, covered with hammered leaf, but there's a newer, smaller, silver sister, and a relatively tiny hand-held infant. The Sumerian gold lyre (2500 BC) was dug up in Iraq (1929) and lovingly re-created by Andy Lowings and his crew in 2003, using materials as close to the original example as possible. Oddly, the original lyre was vandalised in The Museum Of Baghdad at around the same time.The present trio came together in 2012, with fellow harpist Mark Harmer and singer Conner climbing on board the time machine. The lyres look closest in style to the modern day instruments of Ethiopia, large enough to be harps, and prone to drifting out of tune, if they can even be tuned correctly in the first place. This doesn't matter so much, given the modal free-ness of the music, and the room for expression in the poetic line deliveries.

Conner has alighted on poems that concern the strong-willed female deities of Sumeria, hurling herself enthusiastically into an appropriately dramatic vortex. The new interpretations enjoy a mystical co-existence of ancient song-forms allied with the usage of old languages to craft fresh compositions, which stand in their own peculiar time-stream. The effect is unearthly, using cuneiform stone tablets as a beginning point for the imagination of reconstruction. Some songs are sung in English translation, but most are in the original tongue, even if further guesswork is involved in the pronunciations. Ultimately, it's all very vague, but the inspiration has a powerful force, and the arrived-at end-product possesses its own peculiar properties, completely convincing to all of us non-Mesopotamians in the audience. Subject matters are constant down the ages, with some of the poetry lines evoking strong erotic images, once revealed, and handily paraphrased, by Conner.

She took her hurting high shoes off, but Conner's co-performers were already in their socks anyway. Her stage manner was confrontationally jocular one moment, imposing a severe sense of dramatic focus the next. The show featured a rare instance of a single, strategically-placed hiccough near the climax of the set. The lyre-and-voice combinations made up an extraordinary sound, unlike almost anything, although not without vocal references of the likes of P. J. Harvey or Diamanda Galas. Conner was theatrical in her shaping of the lines, but not operatically so: the vocabulary included subtle streaks of English folk-song, but reaching out from a foundation of almost-dead Mesopotamian tongues, fed back through ears that have been listening to the stranger sides of rock. Rarely can a performance loaded with such informational background baggage be, in practice, so entertaining, academic, informal and spontaneously charged.

The Chimera Ensemble were at home In the University's smaller Rymer Auditorium, on the following evening, softly amplified to possess a subtle punch in its cuddling acoustics. This is the University's in-house new music group, and their set was more open than usual to the sometimes alien elements of electronics and improvisation. Adam Bonser often plays upright bass, but for his "Kleeptomania" he sat at an electronics console, with two others assisting with further diffusion and knob-tweaking. The electroacoustic spread included recorder, oboe, bass clarinet, viola, and double bass, the electronic input rippling warmly, becoming part of the acoustic flutter. The set's governing theme appeared to be the relationship between composition and improvisation, with each process often seeming like the other. Bonser had erected certain frames, but the players had room for personal interpretation, thereby creating a rush of imaginative tension. Scrabbling and scuttling was muted into a contained aggressiveness, partially savouring spaces and pauses, the moments before a full leap into hyperactive densiity would be made. The trio required for "Molly's Song 3: Shades Of Crimson" (by Berlin resident Rebecca Saunders) sounded much like an improvising group: the palette of acoustic guitar (using e-bow and bottleneck), viola and alto flute could have been lifted from a session by the Spontaneous Music Ensemble, perhaps one of their sparser, drummerless sections. Again, there was a vocabulary of extreme sonic restraint, clipped, cautious and circumnavigating. Odd outbreaks occurred at the end, with a brief burst of radio static and some calming music box innard-rotation, snapping the audience out of this ruminative musical drift. Richard Barrett's "Codex XV" explicitly engaged with the spheres of improvisation, penned specifically for Chimera, earlier in its month of performance. Definitely new music! The output of individual players was itself subject to controlling improvisations by conductor Desmond Clarke, creating multiple layers of spontaneity, heightened by the multi-instrumentalism of several ensemble members, particularly with the trilling battalions of flutes, recorders and birdsong devices.

Just what is the relationship between improvisation and composition within the moderne composition fraternity? The following day's lunchtime set at the National Centre For Early Music found Canadian drummer Beau Stocker stuck behind a conventional drumkit, when it was clear that he should have assembled a more suited percussion rig. That's the area where his enthusiasm seems to lie. Stocker favoured a light palm-touch on the skins, rolling small objects (snooker balls) or caressing cymbals. The gig was presented as an improvisational event, but Stocker and James Whittle, his cellist guest, were paying a great deal of attention to their notations. The sequence of pieces were a perfect justification of the usual accusation that classically-trained musicians often have difficulties with spontaneous creation. The sounds were padded through diligently, sensibly, emphatically and separately, as if demonstrating a series of test-patterns, self-consciously unfolding with advance agreement. There was no multiple sonic juggling, chaotic overlap or pushing towards the tension of unpredictability. Just a pedestrian wander through habitual gesture. One of the objects was to 'explore the acoustic properties' of various historic local chambers, by capturing their acoustic shapes electronically. This is the kind of mission that artists embark on mostly to gain funding, as if sheer music-making isn't sufficient justification, without the conceptualising. This sampling-of-acoustics wouldn't even have been particularly noticeable, had they not mentioned its existence. Stocker also slung in his study of Sudanese rhythms (North and South), but these were again siphoned through an academy stiffness. Quite a cocktail, but to no avail, in the subjective reality of the moment.

Two days later, in another deconsecrated church across town, The Assembled demonstrated how to successfully alter performance expectations. This University collective inhabited the entire space of Saint Martin-cum-Gregory, which is now also known as The Stained Glass Centre. Few seats were in sight, and there was no obvious place for the the players to be tethered. One of the main points here was to present music that held its very mode of delivery and communication in the central spotlight. Not that there was any clear focus, as it was full daylight for this 1pm showtime, and the musicians were free to roam, mostly carrying their instruments around to lend them a gradually changing position in the marvellous sonic space. By their nature, the compositions seeped into each other, with applause not feeling appropriate, and also because the works chosen easily made up a compatible body of oneness. The performance was titled line/shadow, which was also the name of the opening piece, by American composer Cat Lamb. Simple linear tones were sustained, simultaneously and with varying overlays, massing into a resonant vibration that had resultant effects that could only have been discerned once found colliding around these particular rafters. Then the players began moving from place to place, changing relationships, shifting edges, following the nature of the piece, "Hocket," which was developed by the group, from an idea by saxophonist Ricardo Alvarez. Gaia Blandina carried her cello in space, Catherine Laws even took her toy piano for a walk, but Barrington Brook had to leave his guitar amplifier rooted. Adam Bonser, was back with his upright bass, held aloft, whilst perambulating with saxophone, flute, oboe, recorder, violin and clarinet was easier for the remainder of the Assembled ensemble. This metamorphosed into a theatrical silence, with players brandishing their instruments, freezing in photogenic stages, scuttling subtly into the next tableaux. Then, to close the show, they incrementally shuffled towards pianist Tom McMahon-Hore, eventually disappearing behind glass, where they peered curiously at the audience, their mission done, with only the stored-up applause to break out. Often, when new music concerts set out to derail presentation expectations, the audience is girded for stiff theatrics or forced humour, but the Assembled made their diversions and diversifications meld perfectly with the music, the environment and the occasion.