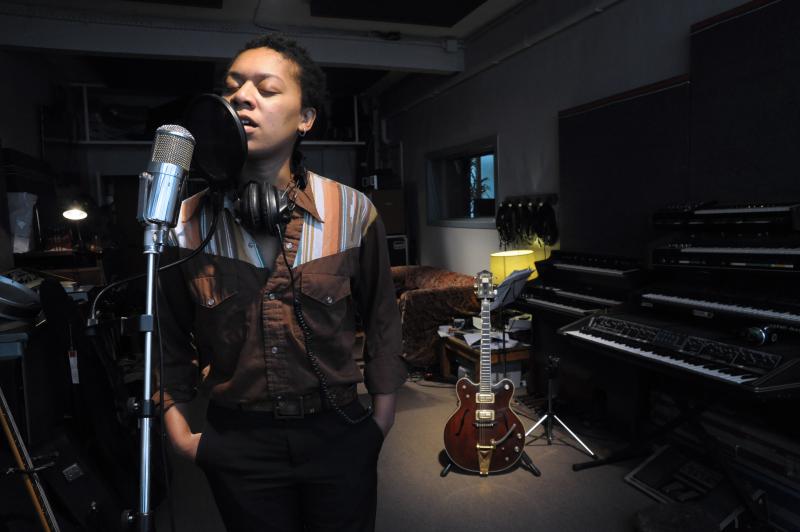 The Duchess is mostly accustomed to music at high volume, so this evening of intimate almost-jazz singer-songwriters highlighted the ripping sound of the joint's sticky beer-suction flooring on its small gathering's footwear. Baby Jesus forbid that any audience member dared head toilet-wards during a particularly delicate point in a song. Fundamentally, this was the rule for virtually the entire duration of each set, as the bias by both artists was emphatically on a sensitised soul-baring hush. Tables and chairs were pulled up close on this slow Tuesday night, as each performer offered a completely solo set: confrontational, embracing, stark, expressive and often filled with humour.
Londoner Gwyneth Herbert wasn't mentioned on the venue's website, but was listed on Krystle Warren's, so there were still a clutch of punters who arrived early enough to catch her performance. Herbert has had a fairly high profile in the UK over the last decade, initially as a more mainstream jazz singer. Her latest album, The Sea Cabinet (Monkeywood Records, 2013), represents a trawl into more individualist currents. It's outside of jazz, not really rock or folk inspired, but seemingly operating within the realms of pure stylised song, perhaps happier as a potential soundtrack to some mysterious would-be Lynchian seafaring flick. Surprisingly, Herbert only sang a couple of these songs, inserting them dramatically into a spread of more robust and ribald numbers from earlier albums. She usually has her band behind her, so this tour with Warren represented an experiment in aloneness, revealing Herbert and her ukulele in a sharply focused spotlight situation. She was almost in cabaret mode, littering the songs with anecdotal asides, cracking jokes and shifting the format by swapping between ukulele and keyboard, or even a completely a cappella delivery, as with "Perfect Fit," which drew on singing and clapping assistance from the audience.
The mood of the songs was equally varied, ranging from the light-hearted chirpiness of "My Narrow Man" to the mournful extensions of "Lorelei," with its meandering keyboard solo providing pause for contemplation, away from Herbert's dominant word-based stream-density. Her voice can scale the heights of sharply-pointed high frequencies, artfully directed away from the microphone's full force, or sweep down into a bassy gruffness, making Herbert capable of schizophrenic character viewpoints. She ended up sauntering between the tables, uke in hand, serenading individual audience members, then disappearing backstage. As a purely musical gig, the set was perhaps too sprawling in style and mood, but viewed as an extremely communicative cabaret show, it was a complete success. Presumably Herbert had assembled this particular act during her few days on the road with Warren, making the approach seem like something she'd been adopting for months rather than days. She's a naturally dramatic soul, wittily assured, and might even continue with this fresh channel for her repertoire.

Herbert's exuberant showing ended up presenting a potential problem for Krystle Warren, who operates on a much subtler level. This daughter of Kansas City now resides in Paris, and her stance is one of loose-tied vocal phrasing and convoluted guitar-picking accompaniment. Straight off, she was aware of Herbert's precedent, so she moved her microphone down from the stage, standing it right in front of the table-huddle. Then she proceeded to step to its side, spontaneously electing to sing straight out into the room. For a venue that's mostly accustomed to cranked-up guitar bands, The Duchess has a pleasingly warm acoustic under its low ceiling. Warren's voice rose effortlessly to mingle with her low-amplified electric guitar. The style is a composite of jazz, pop, blues, gospel, slow funk and general rootsy-spreading. In the end it's never completely stuck in any one of these genres. Her sense of humour is more subdued than Herbert's. More satirical. Warren's songs also feature less of an emphasis on their words. The listener is tempted to hold on to the actual sound of her voice, rather than the lyrics, as she dissects syllables and stretches out lines in unpredictable ways. It all sounded much less direct than Herbert's delivery, requiring a re-calibration of the ears so soon after that lively opening set. The cumulative effect of Warren's songbook can lead to a feeling of repetition and a one dimensional sonic spread. It's all very middle-range, even though she does share Herbert's ability to suddenly soar up into a higher strata.

Warren released the first part of her Love Songs album, A Time You May Embrace, in 2012. This represented the up-side of romance. The soon-coming second-side EP, A Time To Refrain From Embracing, probes the post-affair misery-wake, and these song-previews dominated her set. Warren joked about this, but she was correct in assessing the mood as somewhat 'low.' This was most noticeable once Warren introduced John Lennon's "Jealous Guy," which rose up with its frighteningly original personality. The audience gave this song some of their strongest applause, both for the composition and for Warren's intense interpretation thereof. The set also included "Tuesday Morning" and "The Clod & The Pebble," this latter setting the words of William Blake. Warren maintained Herbert's level of communicative warmth, for what will surely be one of the year's most casually intimate gigs, imparting the atmosphere of a show laid on in someone's living room. Herbert and Warren embraced at the end, like the newfound road-buddies they are, joining together, united in song...


The Black Swan was built in the 15th Century, and its folk club has been in existence for almost as long. This pub has ghosts on the uneven staircase that winds up to its cosy music room. Each Thursday night session features a main attraction, as well as a succession of local opening artists. The calendar also features several outbreaks of Americana, nestled inbetween the purveyors of English, Irish, Scottish and Welsh folklore. This can even mean that country music is allowed, and Texan singer-guitarist Katy Moffatt has been amongst the club's most regular visitors over a period of nearly three decades.

Moffatt started recording solo albums for Columbia in 1975, also working with Leo Kottke and Willie Nelson. Living in Californian parts certainly hasn't diluted her hollerin' and twangin' essence. At The Black Swan, Moffatt immediately asserted her authority, projecting as if she were in a large theatre rather than a small function room. Her voice and guitar might have been cranked up too loudly for the space, but this situation was mostly defused by her expert microphone technique, re-directing her sweet foghorn high notes by deftly turning aside, or casting the high notes up to the ceiling. Her guitaring involved a vigorously percussive attack, followed by subsequent filigree embellishments, three fingers and her thumb adorned with individual picks. It's a detailed style, but not at the expense of rhythmic drive. By the end of the first set, she'd broken a string and lost a fingerpick.

Moffatt treads the line between being an alternative country singer and a lover of Nashville tradition. Her lyrics are often very specific in their unusual concerns, but she can still pen a traditional sentimental ditty, confounding expectations of where her allegiance lies. She included the distinctive "Fewer Things All The Time," the (almost) title track of her most recent album, the more mainstream "Wings Of A Blackbird" and "Walking On The Moon," plus a song from the vantage point of Lee Harvey Oswald's widow Marina, which is about as specialist as Moffat could get. She also dropped in songs by Phil Ochs and Ann Peebles, with "I Can't Stand The Rain" successfully transposed from soul stippling to country streaking. Most of the more wayward numbers were featured in the first set, the repertoire emanating from a more universal viewpoint during the second half. Moffatt is clearly talented in both spheres, but is was the early part of the gig that was more compelling.