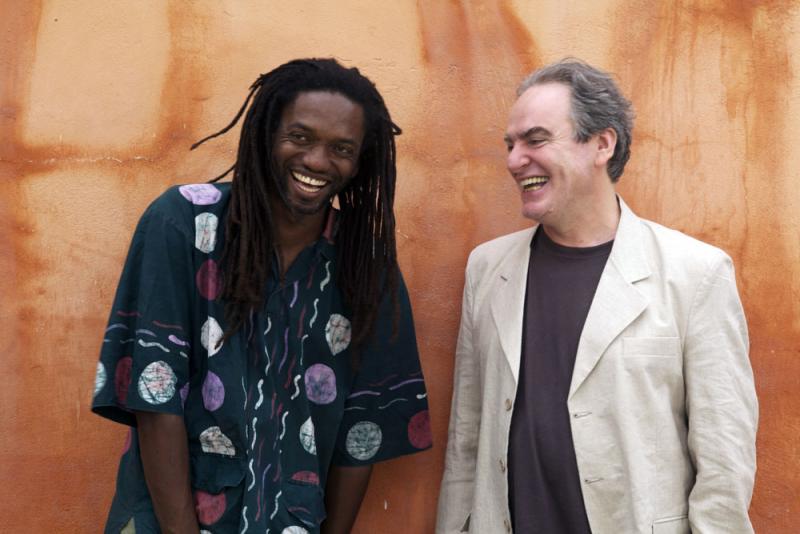 Three hours of oddball Americana. Well, the evening's opening act was a local songster, but Boss Caine sounded like he was growling deeply from across the Atlantic. He was followed with virtually no pause by Paul Fonfara, who offered five of his very different songs. Then Fonfara returned, only minutes later, as Jim White's versatile sideman. So from 8pm to 11pm, the steadily accumulating audience had a surfeit of songs to digest, with hardly any pause for contemplation. Bargain sonics, yes, but demanding on the concentration. Fortunately, each of the artists were sufficiently individualist to lock horns with this challenge.

Boss Caine's voice lies on the edge of affectation, with its sustained gruff burr, after Tom Waits, Leonard Cohen or even those chaps from Tindersticks and Morphine. He keeps it on just the right side of natural, though, sounding committed in his morose, morbid, wistful and heart-sore material. Caine's acoustic guitar pick-up developed a recurring fault, so Fonfara provided his own shiny red, hollow-bodied electric, shifting the sound-spread mid-set. This allowed the guitar to speak with as broad a tone as Caine's voice.

Fonfara's own set began by layering up clarinet phrases, then slowing each one down with his effects pedal, thickening and lowering the sound as he progressed. He switched to guitar and sang along, higher and more dispersed than Caine. An allegedly samba-derived song called for retuning, forcing Fonfara to speak to the crowd. He admitted that such activity was the forté of the soon-coming White. The next bout of tuning was conducted discreetly under the recorded birdsong of a loon, which laid the foundation for his final loop-building creation, before ending up with the clarinet once again. Fonfara's unique stylings could still be heard as some gentle perversion of Americana into modern, individualist song.

Before too long, Fonfara returned to the stage with White, both of them sat on 1970s-style swivel chairs, prompting White to suggest that the pair interview each other in chat-show fashion. White is the one who would provide all the tall tales, that's for sure. Only part of his set was devoted to singing songs, with story-spinning almost taking on equal stature. Several ditties demanded this background, as White invariably has a narrative content to his compositions. The transition was entirely natural, from words to words-and-music. White was sprouted in Pensacola, Florida, but that was only beginning of an itinerant career, hopping from state-to-state. Nowadays, he's dwelling in an old farmhouse in Georgia, stacked with his sculptural creations.

Country music might be the heart, but White is mostly a singer-songwriter who crafts his own structures. There might be a clipped, low-volume punkiness to some guitar figures, or a shimmering sub-surf reverb, or a twangy hillbilly clarity. He might be a long-lost sibling to David Byrne (indeed, he has released wares on the old Talking Header's Luaka Bop label), he might look like an older Jon Spencer, but White mostly stands alone. His songs are made possible by a tendency towards outsider lonesomeness, but he also depends on the observation of friends, associates and sometimes complete strangers. He's a documenter of folks who are even quirkier than himself.

White talked about how much he's always incessantly talked, hoping that he'll wind down into near-silence by the time he reaches the end of his road. This is apparently some kinda ambition. Not on this evening, though, even though this was a preamble to his lone instrumental piece. He sang or talked about his old days as a New York cab driver, about his old buddy Harry, about his dreaded adventures at the Capri Motel, about Cat Stevens 8-tracks and the repeated car-thefts of same, about the self-fulfilling crime-names he found in the newspaper's hidden felony column, when he was almost at the end of life's tether. His recent song "Epilogue To A Marriage" turned out to be prophetic, although it wasn't intended to be autobiographical. He defused the pain by transforming it into a klezmer tune, Fonfara obliging on cavorting clarinet. White brought three guitars on tour, whereas Fonfara only brought one, although Paul also had room for an extra bass clarinet, which he used to widen their duo palette. White sang with a bold authority, drawing the mostly-seated audience around his imaginary campfire. The songs unwound, the tales rambled eloquently, and before we knew it, White had been onstage for around 105 minutes. That might have been a touch too long, but this was mostly due to the hour's worth of songs already offered by Caine and Fonfara. This was a night of ample riches in both song and story.

The NCEM continues its occasional, though ongoing, relationship with the Kala Sangam promoters of South Asian arts, whose headquarters are in Bradford. The multi-talented Vijay Venkat led a trio, dividing his time between bansuri bamboo flutes and the comparatively rarely-deployed vichitra veena (a fretless lute that's played in much the same fashion as a lap-steel guitar). In fact, Venkat is such an adept multi-instrumentalist that he even left one of his axes at home, electing not to play the violin at this recital. Born in Madras, Venkat concentrates on the South Indian carnatic mode, so his accompanying percussionists, Pirashanna Thevarajah and Pujenthan Sivagurunathan, were bearing the expected mridangam (two-headed drum) and kanjira (small tambourine, with only a single grouping of metal discs).

In a quite organised manner, Venkat dedicated each half of the gig to a single instrument, choosing bansuri for the first set and veena for the second. This avoided the potential variety and surprise of constantly switching, allowing the opportunity to establish a particular mood for each portion. The bansuri section possessed a lighter, more playful character, unavoidable when his flute array produced airy, tripping phrases, further influenced by the tendency for each raga interpretation to be concise, particularly when compared to the extended elaboration of a typical North Indian improvisation. The veena set, again influenced by the nature of the spotlit instrument, shimmered with a deeper, introspective sense, as Venkat's substantial rosewood slide (no Teflon modernity for him!) danced across the strings, with a startlingly fluid mobility. The centrepiece of this second half was "Aparadhamulanniyu," based around Raga Lathangi, and featuring an extensive percussion dialogue at its heart, the kanjira revealing its impressive rubbed-bass potential when closely-miked. This listener's aim was to be immersed fully into the very gradually intensifying atmosphere, particularly during the second set. Fortunately, your scribe managed to move away from the noisiest family in the history of concert-dom, during the intermission, fleeing across to the other side of the NCEM's cossetting converted-church acoustic, escaping potato-snack crunches'n'rustlings, persistent shaky-hand tablet-documentation and a particularly restless runaway infant. Subjective calm and inwardness were established for the delicate slidings of the veena during the second phase. This was highly evocative music that demanded complete submersion.

This was the eleventh and final date of a UK tour organised by global music promoters Making Tracks. The Brazilian duo of pianist Benjamin Taubkin and percussionist Adriano Adewale have a manifesto of creating music in the moment, improvising each set without any prior musical discussion whatsoever. Adewale joked that they talk about absolutely every other matter, but enjoy a self-imposed taboo when it comes to pre-gig planning. Following such an intensive series of shows, it was gratifying that their inventions still held the tension of fresh discovery, as well as languishing in passages of calming introversion.

Adewale has been living in London for more than a decade, but Taubkin is apparently still working out of São Paulo. They met in 2009 at the Vortex club in London, which is where they recorded their first album. Given this penchant for improvisation, we might expect the music to sound like free jazz, but their approach tends to be tethered to actual tunes, rhythm and linear development, without much total abstraction or thematic dissection. Perhaps it's easier to consider Ludovico Einaudi, Tord Gustavsen or The Necks as similar souls, but these are only the vaguest of guides. Nor does Adewale and Taubkin's work sound excessively Brazilian, although there were ghosts of bossa and samba in a couple of the pieces. It's not much like moderne classical either, sounding too pleasantly melodic by far for such a categorisation. Ultimately, we're still talking improvised music, but without most of the expected sonic characters of such activity. Maybe it's closer to jamming. That might depend how much any given melody rears its head repeatedly during the tour. Anyway, is jamming just improvisation with beats?

Possible roles were mostly reversed, as Taubkin built up anchoring rhythmic patterns, his blocky phrases developing doggedly whilst Adewale roamed around the pulsing spine of this shimmering body. Taubkin was only occasionally interested in technically impressive speed-runs, preferring to layer reverberant tones in a steady accumulation of rumble. Adewale's percussion array has a pan-global feel, despite his inclusion of the Brazilian pandeiro, cuica and berimbau (tambourine, squeaky-skinned drum and single-string gourd-thing). His central time-keeping tool was a calabash, with a ghatam South Indian-style clay pot to its side and a slender West African drum next in line. While Taubkin was steadily shifting emphasis, or slowly intensifying a structure, Adewale would often switch the conduit for his own rhythms, moving from one tool to another during a piece. Each of these improvisations hung around the ten minute mark, and surely some of the practical choices were made in advance. It was likely that Adewale knew he was going to spotlight his pandeiro, cuica and berimbau playing during particular parts of the two sets, standing centre-stage, then moving closer to the piano for a closer conversation. Each of these instruments became a featured core during their respective appearances.

Adewale broke each finger down into a separate entity, including a lot of highly dextrous multi-digit pattering, where most percussionists would be content to use their whole hand. He was slapping the calabash at the same time as flicking a screwed-down shaker, then plicking individual plastic cowbell simulacra to create delicate scatterings. Snare drum and cymbal work were severely rationed, and it was as if Adewale was gradually introducing elements of his vocabulary in a carefully controlled flow. He only unleashed his secreted bass drum right at the gig's climax. Meanwhile, Taubkin was collecting his rivulets into a waterfall. One number highlighted Adewale's vocal talents, going beyond the tongue-clicks that were regularly featured, and initiating an audience vocal participation, low, chant-based and tribal in tone.

At the beginning of the first set, there was an initial vibration of complacency, which was thankfully fleeting. A feeling that the music was coasting without much incident. Fortunately it didn't take the duo long to set up a dialogue that soon became taut with unpredictability. It's usually such a feeling of tension that generates a compulsive attention to improvisational activities, no matter how calming their eventual results might be, how organic the current.