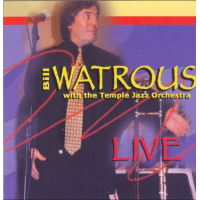 This is the second recording by the Temple (Texas) Jazz Orchestra (following '01's Soft Lights, Sweet Music ) and this time Tom Fairlie's forceful ensemble has some help—we're talking big-time help in the person of superstar trombonist Bill Watrous, whose upper-register pyrotechnics enhance all but the opening number of this high-kicking concert recorded in March '03.

Even though the cavernous acoustics of the Mary Alice Marshall auditorium at Temple College leave no doubt that this is a live performance, the band swings heartily and the audience (apparently a large one, judging from the clamorous applause) laps everything up like kittens gathered around a bowl of milk. Of course, it's hard to veer measurably off course when you're performing charts by rising star Gordon Goodwin (four), established maestro Tom Kubis (two), and legendary Sammy Nestico ("A Time for Love"). Juan Tizol's "Caravan," which opens the session, is neatly arranged by John Wasson and features trombonist Gary Smith, drummer Michael Morris and percussionist Henry Brun.

Goodwin's charts include the rhythmic "Mama Llama Samba," playful "Hot Monkey Love," good-natured "It'll Count If It Goes," and quirky "I Got da ZZZs," on each of which Watrous solos, but never by himself. He is featured on "A Time for Love" but basically plays only the melody on Johnny Mandel/Paul Francis Webster's lovely ballad (at the end of which he nails an x above high z). I don't know whose idea it was for Watrous to sing on the Kubis arrangement of "When You're Smiling," but I have a hunch. Well, I suppose that when one is the guest of honor, he earns certain perks. In this case, Watrous would have been better off staying with the trombone, as he did when he helped introduce that now-classic chart on Kubis' debut album, Slightly Off the Ground. Thankfully, that's his only misstep in this otherwise pleasurable concert. Kubis also arranged Leslie Bricusse/Anthony Newley's "Who Can I Turn To," on which Watrous is showcased with tenors Colin Mason and Greg Bashara and pianist Dave Wild.

Mason and Watrous share blowing space with trombonist Gary Smith on "Mama Llama Samba," with Dave Wild, soprano Dennis Beaver and trombonists Smith and Dave Burke on "I Got da ZZZs." Watrous and Beaver are front and center on "Monkey Love," Watrous and trumpeter Tim Cates on "It'll Count." Besides Watrous and Bashara, the spirited soloists on "Smiling" are Burke, alto Tom Jones, trumpeter Jim Gibson and bassist Kenny Wild.

If the sound were as impressive as the nearly 74-minute playing time, this would be a memorable concert indeed. Even so, it's good enough to warrant an endorsement with a caveat that the timbre may not be to everyone's liking.

Caravan; A Time for Love; Mama Llama Samba; When You