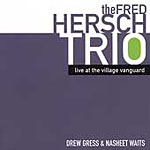 Pianist Fred Hersch starts off this live set unaccompanied, playing a version of Thelonious Monk’s “Bemsha Swing” in a ‘smarty-pants-deconstructed-chamber-post-modernism’ style. As we all know, Monk has never been about high mindedness, and Hersch lets you know he knows just that. Just as his rhythm partners kick in, he shakes off Carnegie Hall for a true New York experience that is a basement known as the Village Vanguard. He plays a little back-and-forth with bassist Drew Gress and drummer Nasheet Waits, rolling up his sheets and getting his hands dirty. Ah yes, that’s Monk dancing beside the pianist and this trio is the real deal.

Hersch has taken on Mr. Monk before, with an entire disc’s worth of music. The 1998 Thelonious (Nonesuch) was at times more Bill Evans than Thelonious Monk. Likewise his Evanessence (Evidence 1998) was pure delight for fans. Where some of his studio dates seem too ‘perfect,’ all of his live discs Let Yourself Go (1999) and Live At Maybeck (1993) are vivacious and full of spirit.

These live sessions from May of last year find Hersch mixing things up to great effect. He knows how to heat things up as with the burning “Phantom Of The Bopera” where Nasheet Waits applies a massive drums solo. Then change into his sentimentalist Bill Evans clothes, plying the melancholy to Sammy Cahn’s “Some Other Time.” Throughout, the emotion is real. Hersch can take you from a tentative New Orleans funky “Swamp Thing” that turns into an all-out blues tune or plaster a hard bop wallop.

The trio covers Wayne Shorter’s “Miyako/Black Nile” with a pragmatic, matter-of-fact approach. Shorter’s intricate compositions only bare fruit in the hands of master musicians. Here, Hersch and company patiently wade through the tune with an exposed vulnerable touch segued by Waits’ rolling solo into a dexterous finale.

The set ends with the standard “I’ll Be Seeing You,” played with just enough syrup to make it tasteful. Hersch’s trio made magic in the center of the jazz universe for this recording.

Bemsha Swing; At the Close of the Day; Phantom of the Bopera; Endless Stars; Swamp Thang; Stuttering; Some Other Time; Days Gone By; Miyako/Black Nile; I'll Be Seeing You.