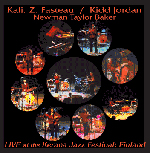 Multi-instrumentalism is one of the enduring legacies of the '60s New Thing and Chicago's AACM, where everything was fair game in the hunt for unfettered expressionism. Few have taken it as far as Kali Z. Fasteau, who plays a different instrument on each of the nine tracks of this live recording from Finland's 2007 Kerava Jazz Festival. Perhaps surprisingly, this doesn't make for a smorgasbord of unrelated approaches, thanks to the unifying force of Kidd Jordan's tenor saxophone, featured on all but one track.

Numbering Archie Shepp, Rashied Ali and William Parker among her many collaborators over a lengthy globetrotting career, Fasteau brings a microtonal world music sensibility to the largely improvised proceedings, showcasing her talent on mizmar (an Arabic double reed instrument), piano, flute, cello, violin, voice, drums, synthesizer and soprano saxophone. Recent Vision Festival honoree Jordan rightly gets equal billing and is indeed the reason this disc sticks out from the pack. As with his masterful Palm of Soul (AUM Fidelity, 2006), Jordan thrives away from the free jazz tenor comfort zone, adroitly dealing with everything thrown at him. Drummer Newman Taylor Baker adds a rhythmic spine when one is needed or sensitively colors the ensembles, but is largely a restrained voice.

Among the notable tracks are "Received Wisdom," where cello and tenor flames commingle around the clattering percussion before morphing into an abstracted blues with an extemporized unison ending, and the ballad "Sibelius Suite," which pitches Jordan's assertive preaching against shimmering synthesizer, until the saxophonist concludes with a sublime soul rending falsetto. Saving the best to last, the arresting saxophone intertwining of "Sound Science" features Fasteau's pure-toned soprano in a satisfying conclusion to this far ranging set.