Art Blakey and the Giants of Jazz: Live at the 1972 Monterey Jazz Festival

By Stuart Broomer
November 10, 2008
Sign in to view read count 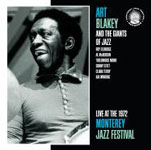 The Giants of Jazz was an all-star band assembled by promoter George Wein in 1971. While Dizzy and Monk were the most celebrated members, the band also included Art Blakey (drums), Sonny Stitt (sax), Kai Winding (trombone) and Al McKibbon (bass).

By the time it arrived at the Monterey Jazz Festival in September of 1972, Gillespie had to absent himself to return to his own band and the group had inspired substitutions in the trumpet chair—here both Clark Terry and Roy Eldridge are present. While Eldridge was a Swing Era star, the the style practiced is a classic mainstream spanning late swing and early bop. Each of the horns get a ballad feature and each is a masterpiece of melodic improvisation: Terry's lustrous and barely accompanied "Stardust"; Winding's "Lover Man" with its warm cadenza; the sudden burst of Bird-inspired alto in Stitt's "I Can't Get Started" and Eldridge's "The Man I Love," all burnished brass and scorching highs. There are three up-tempo blowing tunes: Juan Tizol's "Perdido" (which favors the Ellingtonian in Terry) and two composed by the absent Gillespie, the opening "Blue 'n' Boogie" and the flag-waving conclusion (and Blakey anthem) "A Night in Tunisia." It's superb music-making, driven as much by camaraderie as competition (the latter quality one for which Eldridge and Stitt might be equally celebrated).

Monk, who would perform little after this, is in great form, turning in a beautiful "'Round Midnight" and comping with his usual rhythmic acuity. He combines with Blakey and McKibbon to provide drive and authority. Blakey is thunderous and there's little sense of a mere string of solos here. It's a real band with an enthused and slightly ragged vitality to the theme statements and occasional backing riffs, a combination of excitement and familiarity that could only be achieved by the best musicians saturated in their material. It might be the "Twilight of the Gods," but the musicians don't seem to know it.

Introduction by Jimmy Lyons; Blue 'n' Boogie; 'Round Midnight; Perdido; Stardust; Lover Man; I Can't Get Started with You; The Man I Love; A Night in Tunisia.