By Doug Collette
January 29, 2009
Sign in to view read count 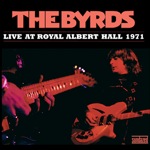 Rescued from a tape that had sat forgotten in Roger McGuinn's climatized garage for decades,The Byrds Live at Royal Albert Hall 1971 contains a complete concert from the fabled London venue including two encores that, as part of this well-recorded 77-plus minute CD, effectively summarize the career of this seminal American rock band. Anyone who becomes familiar with the history of The Byrds will inevitably encounter mention that this seminal American group had its shortcomings as a performing unit, but Scott Schinder's liner notes explicate the serendipitous discovery of this recording, refuting that premise.

"Mr. Spaceman" contains the first prominent use of the familiar twelve-string Rickenbacker guitar in the show, and it follows "So You Want to be a Rock and Roll Star," sounding ever so wry in the hands of these seasoned pros. "Roll Over Beethoven" is important to recall how Chuck Berry's guitar fused the crispness of country with blues flavor, and is also noteworthy as a part of The Byrds' early repertoire (as well as The Beatles, by whom the Byrds were profoundly influenced).

The acoustic set is a reminder of The Byrds' roots in folk music and includes Bob Dylan's "Mr. Tambourine Man," recalling not just his longstanding influence, but also that of Woody Guthrie on his ode to the outlaw "Pretty Boy Floyd." The quartet also renders Leadbelly's "Take a Whiff" with sardonic nonchalance and engages in an abbreviated hoe-down, "Black Mountain Rag/Soldier's Joy."

Surrounding these two segments are performances illustrating the evolution of The Byrds throughout their career. Original material such as "Lover of the Bayou" contains the otherworldly twang imparted by guitarist Clarence White. The distinctive sound surfaces again in further nods to Dylan via "My Back Pages" as well as "You Ain't Goin' Nowhere;" the latter is a crucial representation of The Byrds' groundbreaking trip to Nashville in 1968 for Sweetheart of the Rodeo (Legacy, 2003). The cover of Jackson Browne's "Jamaica, Say You Will" reaffirmed the group's prescience in an entirely different way, as the composer's talent had not reached the mainstream at this point.

The Byrds remained adventurous through this final lineup—here including founder McGuinn, drummer Gene Parsons and bassist Skip Battin beside the late White—and their expedition into the realm of improvisation takes the form of eighteen-plus minutes of "Eight Miles High"; a faintly funky guitar workout gives way to a brisk bass and drums interplay, yet the restatement of that tune's famous intro unfortunately lacks the drama it deserves.

It is the only noticeable lapse in confidence and authority in playing and singing on a CD that otherwise states most emphatically why the legacy of The Byrds continues to grow in leaps and bounds, just as their music did.

Lover of the Bayou; You Ain't Going Nowhere; Truck Stop Girl; My Back Pages; Baby, What You Want Me to Do; Jamaica, Say You Will; Black Mountain Rag/Soldier's Joy; Mr. Tambourine Man; Pretty Boy Floyd; Take a Whiff (On Me); Chestnut Mare; Jesus Is Just Alright; Eight Miles High; So You Want to Be a Rock 'n' Roll Star; Mr. Spaceman; I Trust; Nashville West; Roll Over Beethoven; Amazing Grace.