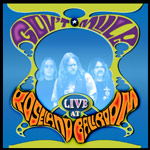 The previously long out-of-print Live at Roseland Ballroom stands as a template for Gov't' Mule past and present and for the foreseeable future. Most of the material included on this welcome reissue was a means to the end of lengthy improvisations, but also remains an integral part of the group's repertoire even today, with the group reconfigured as a quartet.

Present-day Mule rediscovers tunes such as "Temporary Saint, but it's not the same sensation as that of the original trio—guitarist Warren Haynes, bassist Allen Woody and drummer Mat Abts—discovering not just the songs but its own chemistry. The counter-cultural statement of John Kay's Steppenwolf tune, "Don't Step on the Grass, Sam, is a red herring and a bit suspect for that very reason.

Conceived as a power trio a la Cream (though curiously there is no mention of that three-piece in the liner notes including thanks to Grateful Dead, Mountain and Hendrix), Gov't Mule was a little over a year into its development at the time of this recording as the opening act for Blues Traveler on New Years Eve in 1995. Haynes and Woody pursued this as side project from their full-time gig with The Allman Brothers Band in collaboration with Abts, their former partner in Dickey Betts' Pattern Disruptive band.

More expansive in the improvisational slant of the musicianship than ABB could or would afford Haynes and Woody, Gov't Mule nevertheless draws from a wide diversity of influences. The trio hammers the metallic riff of "Painted Silver Light as deftly as it navigates the lilting likes of Warren's collaboration with Dickey Betts, "Kind of Bird (a selection from the Allman book of the period as well).

Haynes' professed admiration for the improvisational genius of trumpeter Miles Davis' quintet with pianist Herbie Hancock, bassist Ron Carter, saxophonist Wayne Shorter and drummer Tony Williams is evident in the fluid means by which, during the course of "Trane, Mule engages in call-and-response, as well as the deft utilization of tension and release. That's not even to mention the various teases that appear in the form of the Dead's "St. Stephen as well as Hendrix's "Third Stone From the Sun.

Gov't Mule was moving towards expansion beyond the power trio when Woody died in 2000, and that progression appears on a fifteen-minute plus bonus track recorded at Roseland Ballroom five years later. A slow blues and wah-wah workout on Hendrix's "Voodoo Chile finds a participant on the original recording, Jefferson Airplane/Hot Tuna bassist Jack Casady, moving in and around Haynes, Abts and organist Chuck Leavell.

This addendum to the original Live at Roseland Ballroom recording may in fact be its least interesting track, but, at its fifteen-minutes plus length, it does flesh out the CD to over seventy-minutes. In addition, it serves the purpose of connecting the modern-day Mule to its roots, a goal wholly laudable and completely fulfilled in this package.