By ASHLEY KING
January 1, 2002
Sign in to view read count 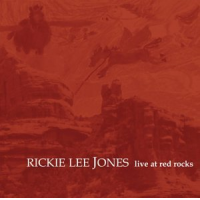 Live records are perhaps the most precarious of balancing acts. For too many artists, ventures into unplugged territory prove to be nothing more than overproduced exercises in self-indulgence. On the contrary, Live At Red Rocks, the most recent release from Rickie Lee Jones, is a refreshingly satisfying jaunt into this well-traveled arena.

In contrast to her 1995 live release Naked Song s, Red Rocks is not about showcasing Jones as a stripped down, acoustic singer-songwriter. But rather it is about showcasing her as a well-rounded and energized whole performer. Her latest finds Jones backed by a stellar band and, thus, is to be celebrated just as much for her passionate and alluring vocals as it is for the exceptional and ornate instrumentation.

Not surprisingly, Red Rocks is a testament to the fact that Jones' music is a melting pot of sorts—doses of folk, jazz, and R&B have long made their way into her catalogue. Highlights include a nearly eight minute bluesy version of "Weasel and the White Boys Cool," complete with trumpet solo, the catchy-but-ethereal "Satellites" and a wonderfully lighthearted duet with Lyle Lovett on "Love is Gonna Bring Us Back Alive."

Red Rocks is certainly not groundbreaking in its attempt. That, however, does not change the fact that it successfully captures the spirit of a live performance as well as a any record is able. In the end, Jones proves that she can balance the toughest of acts...with the scale still in her favor.