By Hrayr Attarian
February 12, 2013
Sign in to view read count 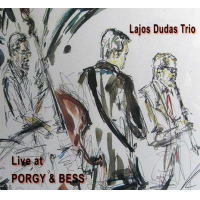 Budapest born and Überlingen (southern Germany) based clarinetist Lajos Dudas is one of the few, contemporary virtuosos of this woodwind in the realm of jazz. His mastery over every nuance of his instrument allows him to exploit the full breadth of its musical range with delightful ease.

The extent of Dudas' talents are heard on the energetic set Live at Porgy and Bess recorded at the famous Vienna club of the title. The sparse trio setting showcases his unique style and allows his band members ample room to shine as well.

Dudas starts off with clean, deceptively, simple bars and like a magician constructs from them advanced and stimulating improvisations. His own "Reni's Ballad" is the prime example of this approach. His long circular lines are cool and melodic as they build intelligent and far-reaching embellishments around the tune.

His clarinet is warmer and more acerbic on the soulful "Back to L.A.," another one of his compositions. Matching his ardent, wailing notes is long time collaborator, guitarist Philipp van Endert's blistering tones. The Dusseldorf native showcases his versatility on this session. He brings classical sounds to the waltzing "Maydance" and a simmering bluesiness to Attila Zoller penned "Homage to OP." The deconstructed tune features delightfully angular duets and bassist Leonard E. Jones' deeply lyrical and conversational soloing.

Chicago native and Ratingen-based Jones has had a long career of plucking and bowing in a variety of genres. Here also he demonstrates his graceful agility. Traditional accents pepper his edgy walking bass on "Soft Waves" while his playing is percussive and gently funk infused on "Rumpelstilzchen."

The trio has an impeccable synergy. Its esprit du corps is heard on the sentimental and passionate "Embraceable You" as the resonant strings buoy Dudas' earthy and warm intonation creating an enchanting ambience.

The veteran reedman and his superlative trio have released a laid-back album of engaging and stimulating jazz with a European flair. One that captures the intimacy and the excitement of the original date.