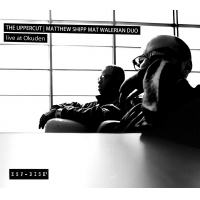 While pianist Matthew Shipp has recorded a slew of head to heads with saxophonists, his duo -The Uppercut -with Polish reedman Mat Walerian is different. Reason being that on Live at Okuden the pair tackles a program of Walerian's compositions as well as four of the more expected jointly credited improvisations. However you might be hard pressed to distinguish between them as the compositional elements are subtle -a hint of sweetness from the hornman perhaps -but nothing too obvious. Although Walerian comes from a generation younger than Shipp, they have formed a strong bond evidenced by several tours in Poland and another recording in the can with master drummer Hamid Drake.

While the familiar tropes which make Shipp such a distinctive stylist remain in place, he pursues them without the single mindedness that characterizes his own dates, thereby allowing ample room for Walerian to shine. For his part the Pole exudes a spare melodicism, predominantly relying on the conventional registers of his alto saxophone and bass clarinet to express the speech like inflections of his lines. In fact conversational exchange forms the main currency of the duet, in which Walerian's free flowing legato contrasts with the pianist's spiky staccato accompaniment.

Although separated into individual cuts, the first five pieces flow together. Walerian's boppish bass clarinet opens alone on "Introduction," before Shipp combines in sparkling lyrical vein, with bluesy undertones emanating from both. On "Blues For Acid Cold" Walerian turns brooding and mournful, and is still reflective on "Jungle Meditation," though stretching the envelope with whistling sighs. He switches to alto saxophone for the next two selections, in animated dialogue on the joint "Free Bop Statement One" and then breathy but insistent on "Free Bop Statement Two." However it is "Love And The Other Species" which represents the high point of the recital, as Walerian's alto spirals and soars above Shipp's thunderous clusters before a gradual easing down to a subdued conclusion.