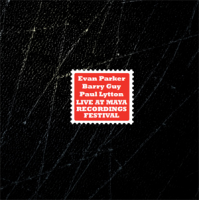 Nowadays operating as an occasional unit rather than a regular touring ensemble, they nonetheless combine with energy, conviction and passion. If anything they hew closer to free jazz core values in terms of dynamics and intensity, often coming on as a deconstructed power trio, especially when Lytton's percussive clatter coalesces into a surging pulse. There are no preconceptions: each number is completely unscripted, with little recognizable in the way of melody or rhythm, although they do dragoon repeated motifs into the mix to build tension, as part of the bracing exchange of nuance and gesture.

As ever the lead shifts round the group at pace. Parker's tenor saxophone takes prominence in "Obsidian," squeezing out gobbets of thick curdled notes, initially almost in a call and response pattern with bass and drums, but quickly accelerating into a near simultaneous three-way exposition. On occasion audible connections become apparent as when Parker echoes a staccato phrase by Guy towards the end of the cut, but more often that ability to follow even anticipate each other with telepathic accuracy transcends the obvious to produce music through something like alchemy. Saxophonist and bassist exhibit a particular affinity, notably on "Chert" where Guy's bravura bowing intertwines with Parker's soprano muezzin cry, circular-breathed into many braided strands replete with ghostly whistling overtones.

There's so much going on that paradoxically the pieces can sound samey if not listening sufficiently closely. But when digging beneath the sheer surface, the invention astonishes. Sometimes it may be easier to appreciate when there is less happening. Both Lytton and Guy demonstrate their ingenuity in "Gabbro," as solo passages emerge from the flow as part of the natural evolution. Lytton piles textures one atop the other in a rapidfire galloping barrage, while Guy's swooping lines plunge precipitously from the highest harmonics to the very depths and then instantaneously reverse in a flurry of hyperactive resonance. But it remains as a unit where they are at their strongest, and this bulletin from the road suggests that there is still plenty of mileage in their tanks yet.