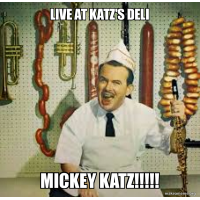 The recent discovery of "lost tapes" by legendary figures such as John Coltrane and Pee Wee Marquette has led to record companies scouring their vaults for unreleased recordings. One such is the discovery and release of Live at Katz's Deli on Gonif Records. The find is resonating on both 52nd and 47th Streets and in the old Borscht Belt.

Recently unearthed in an abandoned public storage facility in Queens, the album features a baker's dozen of Katz's material. The singer/clarinetist was a fixture on the Catskills scene in the 1950s and 1960s.

Introduced by legendary Birdland announcer, Pee Wee Marquette (who had coincidentally stopped by the bistro for a little tongue sandwich), Katz and his Kids leaped into one of their biggest hits, "In Walked Bud's Buddy, Bubbie." The klezmer bossa, "Girl from Cracownema" had the crowd devouring Katz with their Derma. And, the exotic 5/4 "Take Five Slices" was a hash-slinger's swinger.

Katz, whose son is entertainer, Joel Grey of Cabaret fame and whose granddaughter is Dirty Dancing's Jennifer Grey, was on fire throughout the gig. The group do a swinging cover of Lawrence Welk's "Take a Train" (not to be confused with Duke Ellington's classic version) and a burning "Giant Schleps." It's apparent from the raucous reaction of the diners that Katz's small group enthralled and invigorated so much that the liners state the place ran out of Kosher pickles.

Ballad work is non-existent on this album. There's a moderately paced version of "Body and Soul" and an upbeat "One Meatball," in which can be heard (on headphones only) a yenta near the mic emitting a not so quiet—and perhaps intentional—burp. The last two cuts ("Matzohs Too Hard" and "When the Red, Red Reuben") are played in a Dixie-klezmer-Sun Ra style.

Live at Katz's Deli is a terrific album that hopefully will egg on other archivists to locate more of Katz's oeuvre. Grab a Dr. Brown's and dig in.