BY DONALD ELFMAN
December 18, 2008
Sign in to view read count 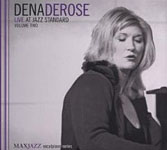 This is the kind of series that could last forever—pianist Dena DeRose seems to have an endless supply of well- and little-known tunes from the collected songbooks and both the music and performances are timeless. The second set from the same evening that produced Volume One (MAXJAZZ, 2007), this has the same in-the-moment sense of place and, what sounds like a contradiction in terms, a recorded spontaneity.

This trio—with DeRose's ever so natural yet seasoned singing and piano, delicate drumming of the ubiquitous Matt Wilson and sensitive pulsations of bassist Martin Wind—now has the great experience of having traveled and played together that the greatest groups attain. You can hear that to a tee in the opener of this set, the rarely done "The Ruby and the Pearl". The leader recorded the tune on her very first album but, in a spontaneous decision, does it here in 3/4 time. DeRose plays Dave Brubeck's chestnut "In Your Own Sweet Way" as an instrumental number. She has a sense of architecture in how she states a melody and plays a solo and never does a note feel wasted. And talk about sympathetic partners who know how to be individually expressive but also what their leader needs.

Carmen McRae inspired DeRose's choice of "I Can't Escape From You". It's a knockout reading, brooding and emotional, but celebratory in its directness. And speaking of other singers, DeRose has absorbed the best of the great ones while being her own well-defined self at all times. "Laughing at Life" is a glorious romp that opens with the leader foregoing the piano and singing the opening statement with just bass and drums. This is a tune in which everybody gets to let loose a bit in an egoless way.

There are eight standards here but none of them are overly known and so the set feels at once comfortably familiar and something brand new. The evening closes with one of the loveliest ballads in the American repertoire, 'We'll Be Together Again," leading the expectation that there'll be more from this trio.

The Ruby and the Pearl; When Lights are Low; Detour Ahead; I Fall in Love Too Easily; In Your Own Sweet Way; I Can't Escape from You; Laughing at Life; We'll Be Together Again.