By Michael Fortuna
September 1, 2001
Sign in to view read count 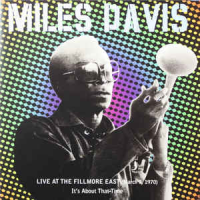 The crowd at the Fillmore East may have been puzzled after trumpeter Miles Davis finished his sets at the New York concert hall in March 1970. At the time, the audience was hearing something revolutionary and controversial pumping out of the loudspeakers.

Little did they know that Davis was about to unleash the electric jazz/rock album Bitches Brew onto the public a month later, causing a rift in the jazz community. Thirty-one years later, Columbia/Legacy Jazz has unearthed two of those sets from the quintet's performance to bring Live at Fillmore East (March 7, 1970): It's About That Time.

Davis' group for those sets — Wayne Shorter on soprano and tenor saxophones, Chick Corea on Fender Rhodes electric piano, Dave Holland on acoustic and electric bass, Jack DeJohnette on drums — had been dubbed "the lost quintet" because no studio recordings had been released with this lineup. (It's really a sextet with the addition of Airto Moreira on percussion, but liner notes writer James Issacs says it's "a mere technicality." Percussionists never get a fair deal.)

The best way to describe the sets are free-for-alls. DeJohnette and Holland are constantly rumbling under Corea's keyboard work, who's underplaying Davis' or Shorter's maddening squeals and trips up and down the scales on songs like "Directions" and "Spanish Key."

The band's improvisation skills are astonishing, considering that at times everyone's soloing on top of each other. A closer listen reveals that Davis, Shorter and Corea are playing the syncopated solos associated with jazz, while DeJohnette lays down a monster rock-laced groove behind them.

Live at Fillmore East is as it happened, with no tape edits, unlike the rest of the live albums during Davis' electric period. If you're not observant on the CD player display, you won't know when the next song begins, because the group doesn't pause between numbers, creating a glorified 45-minute medley.

But this live double album does have something in common with its studio counterparts: it isn't meant to be listened to in one sitting. Even with the small number of personnel, Davis and company have so many musical ideas bouncing around, one may not be able to soak it all in at once.

After a while, once the ears begin to isolate the parts, one discovers that Davis' group was pushing the limits of musical ideas and succeeding. This is an amazing, rare glimpse into Davis' electric journey, and like the title says, it's about that time.