BY MARK SULLIVAN
January 17, 2017
Sign in to view read count 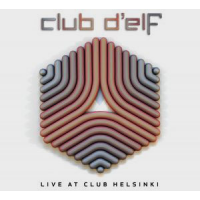 The Boston-based collective Club d'Elf seems to attract genre labels like nobody's business. Moroccan-dosed dub-jazz, trance, psychedelia, free jazz, electronica, hip hop, avant-garde, jam band, rock...what other styles have you got? At one point or another any of these labels could apply, but the distinctions are blurred in the joyous sonic stew. The band has hosted a dizzying array of players: their website includes long lists of "Special Guests," "Rotating Cast," and "Occasional Conspirators." But the core group of bassist Mike Rivard (who also plays the sintir, the Gnawan bass lute), drummer Dean Johnston, oudist/percussionist Brahim Fribgane and turntablist Mister Rourke guarantees two things: a solid groove, and a prominent Moroccan music influence.

This version of the band features keyboardist John Medeski and his array of analog instruments. In addition to extended piano and B3 organ solos, he uses electric piano, clavinet and mellotron for color. You don't often hear mellotrons outside of old King Crimson and Moody Blues records. The other guests are frequent session guitarist Duke Levine and New Age flutist Thomas Workman (on two tunes on the second disc of the set).

As the title says, this is a live recording. The two discs are labelled Set One and Set Two, and they very much feel like a document of a performance. The music frequently flows directly from one song to another without pause, the sort of seamless transitions that only experienced improvisers can pull off. The sets each include a couple of group improvisations, compositions by Rivard and Fribgane, and a traditional Moroccan song.

Fribgane's oud is a defining sound, especially in the traditional selections. The most Moroccan tunes, notably "Zeed Al Maal" (which also features Rivard's sintir) barely sound Western at all: evidence of the deep North African part of the group identity. But the reggae cover of Jamaican vocal group Gaylads' "Africa" gives Levine's guitar some time in the spotlight. Fribgane's "Hegaze" features his oud, but also gives plenty of space to Medeski's B3 organ solo—not a standard element in a traditional arrangement.

Club d'Elf gives new meaning to the word "eclectic." But they never sound eclectic for the sake of it. Everything that happens seems to occur organically: no matter where they come from, the musical elements sound like they fit together. So if you like jam bands, Moroccan music, or free improvisation: come on in, the water's fine.