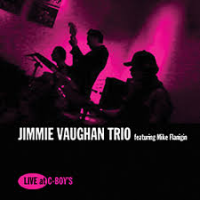 Over the course of eight selections and a total running time of approximately thirty-six minutes, the Jimmie Vaughan Trio make Live at C-Boy's short and sweet, and deliciously so. The band enhances the simplicity of the three piece format with takes on tunes as well-known as Bruce Channel's "Hey Baby"and the blues-soul staple "Saint James Infirmary," turning the familiarity of the material into a distinct advantages. As a result, the opening number, "You Can't Sit Down" sound like an irresistible invitation.

And likewise, the rise and fall of sound as it swells from keyboardist Mike Flanigan's Hammond B3, whether it's the dominant instrument or not, it fills the ensemble's sound proportionate to its part of the arrangement. The same might be said for the vocal tracks here, of which there are but three; whether it's the leader or the featured player on "Come On Rock Little Girl," those numbers pace the setlist and maximize the impact of the instrumental tracks that surround them. And you don't so much hear drummer Frosty, nee Barry, Smith as hear him, like a heartbeat, on an almost subliminal level: it's little wonder the late musician became renowned in these Texas environs following his brush with fame working as a duo with vocalist/ multi-instrumentalist Lee Michaels late in the Sixties and early in the Seventies.

The slow and smoky likes of "Dirty Work at the Crossroads" is no doubt more than a little akin to the barbecue served all around Vaughan's hometown Austin, Texas, the location of this club he so favors with this unit. An endeavor that provides this linchpin of the Fabulous Thunderbirds and sibling of Stevie Ray Vaughan's some refreshing respite from his primary allegiance to the Tilt-A-Whirl ensemble, there's a tangible sense of invigoration as Jimmie and his band so casually approach these numbers and each other.

In fact, by the time "Cleo's Mood" closes this Live at C-Boy's CD, the Jimmie Vaughan Trio have effortlessly transported themselves and their listeners to another space and time, at once comfortable and enlivening, not to mention intoxicating in the best of all possible ways.