By SAMUEL CHELL
September 1, 2004
Sign in to view read count 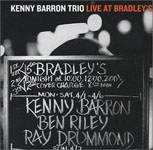 One of a handful of truly great living jazz pianists, Kenny Barron has never sounded better to me on record. After listening to him in this setting, I'm beginning to understand why so many musicians lamented the passing of Bradley's, the Manhattan night spot that featured a grand piano handpicked and donated by Paul Desmond. If there's one performance on this recording that testifies to Barron's gifts, it's his exquisite and daring reading of Rodgers and Hart's "Blue Moon." He repeats and draws out the melody to the point where it practically becomes reductive and repetitious. Then when he has you indoctrinated in the skeletal structure of the tune, waiting for it to end, he re-opens it with bursts and fountains of melodic colors—elongated, spinning note-streams that rise and fall and rise again, transporting this listener, at least, on a heady film of captivating lyrical moon dust.

But the real genius of this performance (unless memory deceives me) is Barron's incorporation not merely of the Rodgers' influence but of Freddie Hubbard's recording of the tune with Art Blakey and the Jazz Messengers ( Three Blind Mice ), which in turn was inspired by Clifford Brown's rich if straightforward interpretation of the tune on Clifford Brown with Strings ). Instead of the single-note melodic phrase (Bb) for the words "Blue Moon," Barron goes with the Hubbard three-note phrase (CGBb), turning it into a motif. And not only do Barron's alternate chord changes match those of the Messengers' chart, but he captures the identical voicings and passing tones as well. Finally, the dazzling, rocket-like melodic excursions of the trumpet solo are matched here by Barron's fluid right-handed melodic sallies but at an entirely different dynamic level. It's as if the quiet beauty of Barron's touch serves less to replicate Hubbard's performance than to resonate with it, providing an enchanting echo of the performances that occurred 35 and 45 years prior to it.

In short, this performance of "Blue Moon" is a tribute equally to Rodgers & Hart, Clifford Brown, Freddie Hubbard, and Kenny Barron. It's enough to make you believe that once a beautiful melody has been released into the dynamic energy field we call human consciousness, it can never die.

Everybody Loves My Baby, but My Baby Don't Love Nobody But Me; Solar; Blue Moon; Alter Ego; Canadian Sunset.