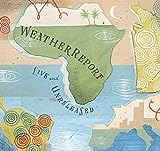 Columbia/Legacy have dug even deeper into their closets and dusted off eighteen excellent live performances by one of fusion's finest units. These tracks, recorded between 1975 and 1983, represent several different lineups of the band whose only permanent members were Shorter and Zawinul. As iffy as some of Weather Report's studio albums were — too often sacrificing taste for the sake of chops — it was always hard to argue with their astonishing live presence. The tracks gathered here hold all the promise of those legendary live shows, and myriad surprises.

The set starts off on a high point, a searing version of "Freezing Fire by the lineup with Johnson, Thompson and Acuna. The immediate drum thunder grabs hold of the ears and won't let go. Shorter is slightly out of tune as usual, but his solo is furiously exciting. Zawinul characteristically selects his notes and timbres well, taking a slower pace for effect on his improv. Johnson is in tremendous form and amped so loudly that he blasts out wild distortion at one climactic point. After such a head-rush, "Plaza Real is almost a letdown. It is a quiet tune to begin with, making room for Rossy's pretty concertina, but it is recorded at a very low volume and remains there most of the time. Shorter takes an amazing solo on "Fast City while Pastorius remains fairly far back in the mix. Not so on "Portrait of Tracy , one of the bassist's signature tunes, which Zawinul colors with space-age synth burbles. Jaco elicits hearty laughs by beginning with Carol Burnett's closing theme before striking those glorious harmonics. The remainder of the first disc contains similarly fiery renditions of WP staples. Very satisfying.

Disc 2 begins with the percussionists' voices and samba whistles, leading into the jaunty theme of "Black Market . There are several less familiar themes on this disc: "Where the Moon Goes , a weirdly complex tune with Zawinul's voice run through the Vocoder; the downright dangerous "Two Lines ; Shorter's moody "Cigano . Zawinul and Shorter honor their roots by including two tunes Zawinul wrote during his days with Miles Davis, "In A Silent Way and "Directions . The former is a thing of stately beauty, the latter a vigorous fuse-fest like most of WP's best material. "Port of Entry is a bit static despite Pastorius' kicky false harmonics, but the bassist locks in perfectly with Erskine on the percolating "River People .

Bob Belden goes out of his way to dredge up as much quality material as possible for Legacy to issue. Luckily, his judgment so far has been consistently sound. These live tracks are treasures for the most part, a welcome addition to the refreshed Weather Report canon.