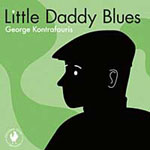 Born in Greece, Hammond B-3 denizen George Kontrafouris' organ combo fare sounds purely American in scope and attack. In a nutshell, he has it all down to a science. And with testimonials by fellow B-3 great Tony Monaco cited within the liners, the music iterated here features a Texas roadhouse type gala, spiced up with snappy pulses and tenor saxophonist Manuel Dunkel's edgy choruses. However, it's Kontrafouris' cagey right-hand voicings and broad comprehension and implementations of the jazz vernacular that serves as the prime accelerator throughout.

Kontrafouris is all over the keyboard on the buoyant burner titled "The Notebook, yet he aims to soothe and relax the listeners' psyche within certain regions of sound, largely aided by Sami Linna's airy electric guitar lines. Nonetheless, the organist and his ensemble generate a mixed bag of pulses, where capacious group-based performances attain equal footing with torrid soloing maneuvers. Kontrafouris zooms in for the kill during many sequences via his blitzing chord clusters and darting single note forays, while often comping for Dunkel and Linna.

The quintet pursues a funky jazz/soul vibe made famous by the late saxophonist Eddie Harris during the composition titled "Heatin' E. Here and throughout, Kontrafouris' penchant for incorporating catchy hooks, loom as an attractive and substantive attribute. In sum, the organist convincingly elevates the tried and true into an organ-combo vibe that spawns a mark of authenticity. That notion alone speaks proverbial volumes.

The ruler; The notebook; Teenie