By Paul Naser
November 8, 2018
Sign in to view read count 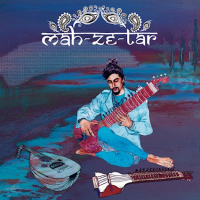 As technology makes it easy to share information and art between cultures that were once far removed from each other, "World" and multi-genre music that draws from many different traditions becomes more and more common. It is with this spirit of fusing many different sounds and styles that multi-instrumentalist/vocalist/composer Maz Karandish began his project, Mah-Ze-Tar, which is finally releasing its debut, Liquid Lotus.

There is much in the way of traditional eastern music on the record, but from a wide variety of traditions. Each track on the album pertains to a particular Indian Raga, which can be most closely (but not at all exactly) likened to a scale in Western music. Even so, the inclusion of instruments like the oud and Turkish saz, as well as Karandishi's familiarity with Persian, Arabic and Turkish repertoire (among others) creates an intriguing blend throughout the record.

The opening track, "Maand," is a beautifully ambient sitar feature. Interestingly, the track uses a synthesizer much in the way a tanpura would drone underneath a more traditional performance. This fusing of electronic and traditional instruments foreshadows the heavy electronic influence of tracks like "Bhoopali" and "Cosmic Union."

The 7-minute "Liquid Lotus" combines beautiful vocals with a heavy back beat and instrumental solos akin to something that might have been on a World Music version of John Scofield's Überjam. "Folk Tune" has a similar atmosphere, and the groove supplied by the tabla provides a lot of rhythmic interest that Karandashi explores with expertise.

The entire record is a very pleasant listen, though it remains consistently mellow and subdued in tempo and energy, lacking a real arc. The combination of produced electronic elements with Karandashi's haunting performance on vocals and the wide variety of instruments he plays is interesting and enjoyable on the whole, and recommended to fans of smooth jazz or ambient music.