By JACK BOWERS
October 2, 2019
Sign in to view read count 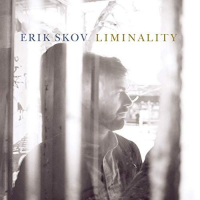 Liminality is defined as "occupying a position at, or on both sides of, a boundary or threshold." Guitarist Erik Skov had a good idea: infuse his debut album with a certain amount of liminality (ambivalence) in the form of eight long-form compositions designed to lend his able sextet weighty meat on which to chew.

While Skov's essentially laid-back themes no doubt gauge the group's compatibility, what lies in their wake is a more or less decorous blowing session with a handful of well-chosen twists and turns in which the leader's nimble guitar plays a leading role. The opening "Summer Meditation," introduced by Kitt Lyles' resonant bass, offers a foretaste of what is to come, with Skov's mellow guitar juxtaposed against earnest declamations by the front line—trumpeter Emily Kuhn, tenor Dustin Laurenzi, trombonist Euan Edmonds—and a serviceable if less-than-noteworthy tune. Drummer Gustavo Cortiñas weighs in with some assertive licks, as he does whenever the need arises.

"Rewake" resides in a basically similar groove before "Ascension" raises the tempo and the heat behind splendid work from Laurenzi whose tenor dances brightly through the changes before yielding the floor to Skov and the ensemble. Skov regains the spotlight on the rhythmic "Like Sounds," which precedes the leisurely "Fading Embers" and fast-paced "Diversion," a charming swinger on which Kuhn, Laurenzi and Edmonds show their chops are up to the task. "First Light" lends a lullaby-like undertone to Skov's lyrical guitar before the light-hearted "Traveler's Tale" brings the session to a close. The rhythm section sparkles here, as do Edmonds (muted), Laurenzi and the leader.

For what he had in mind, Skov has, for the most part, succeeded. He and his teammates are well-schooled and articulate. What the album shows above all else is promise. As Skov writes, his debut "aims to celebrate music as a life-long state of liminality . . ." Rest assured we have not heard the last of the talented Erik Skov or his music.