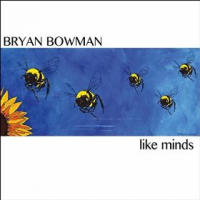 A fixture in the San Francisco Bay Area jazz scene for some time, drummer and composer Bryan Bowman makes his recording debut as leader on Like Minds, a well-crafted eleven-piece musical statement of original contemporary jazz containing a touch of bop, blues and some burning accessible material delivered with a lot of spirit. Hailing from a family of musicians—where father Robert is a classical pianist and Professor Emeritus at Chico State University and mom plays the cello when not practicing psychology—one can understand the influence music must have had at home and perhaps, the obvious developments of his appreciable talents as musician. His professional experience has led him to tour and record with major jazz artists, perform on piano and serve as a regular accompanist with the California Jazz Conservatory.

Among the many factors that make this album so appealing, is the quintet of excellent world-class cast of players Bowman has chosen to accompany him on this first effort. One will experience the sounds of former New York performer and now Bay Area local, trumpeter Ian Carey doing his best impersonation of Clifford Brown on the opening up tempo bebop number "Pick You Up," while on the following "The Undone" former child prodigy, pianist Matt Clark and Indiana son and former Seattle mainstay, bassist Doug Miller are featured on solos. The drummer is the other featured player on the latter tune, in which he displays a bit of his more than ample chops on the sticks.

The light and tender ballad "Entitled" features Carey on the Harmonized muted trumpet along with the tasteful play of tenor saxophonist and Berkeley-native, Bob Kenmotsu playing in unison as the modern rock/jazz piece "Restless Boy," features the pianist and the leader in a solid performances. Bowman introduces the burning post-bop original "Other One," where the drummer accents the splashing cymbals on another fast-paced sizzler featuring the trumpeter and saxophonist on hot solo shouts.

The music turns south on the soft medium tempo Bossa Nova-styled "Sleeping Cutie" which, turns out to be one of the highlights of the disc featuring Kenmotsu's delicate tenor voice and Carey on the flugelhorn followed by some handy work on the keys from Clark—all marking this original a keeper worth repeated spins. The group gets into the blues on the angular melody of "Baloo's" then takes a different approach on the lively upbeat rockfish "Upper Hand."

Bowman pens a homage to Wayne Shorter and Kenny Barron on the melodic medium tempo title track and closes the date with the gorgeous piano trio ballad of "Border," featuring brisk solos from Miller, Clark on gentle piano lines and the leader on some light expressive brush work. Looking to branch out from his Bay Area roots, drummer Bryan Bowman's audacious debut may well be the catalyst, the vehicle that this performer rides into the sunset claiming a piece of the jazz landscape all to himself. Clearly, a hidden treasure and a gem of an album, Like Minds shines all over.

Pick You Up; The Undone; Needles Everywhere; Entitled; Restless Boy; Other One; Sleeping Cutie; Baloo's; Upper Hand; Like Minds; Border.