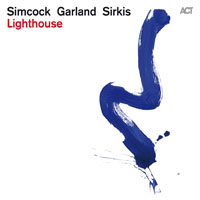 With Lighthouse, saxophonist Tim Garland, pianist Gwilym Simcock and percussionist Asaf Sirkis make the move to completely egalitarian collective. It's also the first album to feature the trio without any additional guests. Garland's Lighthouse Trio first came together on the saxophonist's If the Sea Replied (Sirocco, 2005), an ambitious song cycle that—in addition to including mates from his impro-folk Lammas and Acoustic Triangle, which by that time also featured Simcock—was scored for members of the Northern Sinfonia Orchestra. Libra (Global Mix, 2009) was even more far-reaching—a double-disc set sporting an even larger cast of characters. But the emphasis was always on the core trio—and, with the exception of three jazz covers on Libra—Garland's compositional pen. With Lighthouse, the trio's name reflects its more democratic nature, and in particular the emergence of the twenty-something Simcock as a leader in his own right.

Also like Storms/Nocturnes and its recent Via (Origin, 2011), Lighthouse is brimming with positive energy, virtuosity and compositional complexity, yet none of it ever seems to be there for its own sake. Sirkis' percussion rig allows him to combine rhythms and textures from around the world, whether it's the more conventional kit work of "Space Junk" or the clay pot that drives Garland's gentler "One Morning," where the trio proves capable of greater lyricism and more delicate ambience. Also a bandleader, Sirkis is the ideal foil for Garland and Simcock; it's less about filling the space left open by the trio's lack of a bassist, and more about a group whose sound exists on its own terms, with plenty of contrapuntal challenge on Garland's "Above the Sun," where knotty lines seem to orbit around each other, twist and turn through each other, and finally come out the other side into a challenging set of changes driven by Simcock and Sirkis' exhilarating accompaniment and Garland's equally thrilling soprano solo.

Three players whose reputations have grown sufficiently that a name like Simcock Garland Sirkis is enough to describe what to expect, Lighthouse may seem, on paper, to be less ambitious in scope than its predecessors. Freed up to focus solely on each other, however, Lighthouse actually raises the bar by shining a more focused spotlight on a stimulating and empathically communicative trio that just keeps getting better, year after year.

Space Junk; Weathergirls; One Morning; Above the Sun; The Wind on the Water; King Barolo; Wax Lyrical; Devilled; Tawel Nawr.