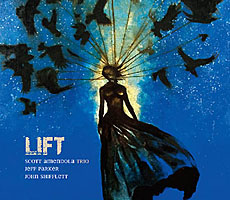 A virtuosic salvo of dynamic trap set flourishes introduces "Tudo De Bom," the Brazilian-influenced number that opens Lift, the debut of the Scott Amendola Trio, reinforcing the fact that this drummer-led session has no intention of forgoing percussive invention in favor of austere compositional strategies.

A stalwart sideman to such notable West Coast improvisers as Nels Cline, Ben Goldberg and Charlie Hunter, Amendola's proficiency behind a drum kit has long been in demand, with composing a growing component in his oeuvre. His diverse background as an accompanist inspires an eclectic variety of tunes, while his fondness for in-the-pocket rhythms lends the date a cohesive sensibility, avoiding the dilettantish affectations of musical tourism.

Amendola is joined by longstanding bassist John Shifflet and Chicago-based guitarist Jeff Parker, both members of Amendola's quintet, which also includes guitarist Nels Cline and violinist Jenny Scheinman. Though privy to a surfeit of solo space himself, Shifflett's unwavering support provides Amendola and Parker with a great deal of improvisational freedom throughout these skeletal tunes—more so than many younger drummers' recent efforts, which often value compositional complexity over stimulating drum technique.

Expounding on a variety of genres, the trio's exploratory excursions range from the exotic "Blues For Istanbul" and the funky "Lima Bean," to the reverb-laced rockabilly of "The Knife" and the bucolic Americana of the title track. Underpinned by Shifflet's hypnotic bass ostinato, the dub-inflected "Cascade" draws a sonic parallel to Parker's flagship band, Tortoise, with Amendola's otherworldly electronics augmenting the guitarist's atmospheric blend of chorus, reverb and subtle overdrive.

The metallic abstraction "Death By Flower" features the session's most assertive playing, highlighted by Amendola's thunderous palpitations and Parker's staggered volleys of coruscating distortion and processed noise—a unique experimental approach with few equals in the avant-garde. Conversely, the dulcet lyricism of the title track and "Lullaby For Sascha" offer dynamic contrast in the form of serenely delicate tone poems.

Eschewing convoluted charts in favor of streamlined theme and variation-based structures, Amendola's expansive drum technique infuses the trio's elastic interpretations of these unadorned sketches with a wide range of dynamics. His pneumatic downbeats and intricate fills convey the same level of nuanced detail and depth as his understated snare accents and colorful cymbal shadings.

Melodically accessible and rhythmically engaging, the empathetic interplay of these three longstanding collaborators mirrors the thematic conceit behind the Victor Zubeldia painting that adorns the album's cover, earning Lift its title.