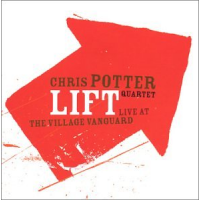 Utilizing the same core group from his two Verve releases, 2001's Gratitude and 2002's Traveling Mercies, saxophonist Chris Potter recorded a couple days worth of gigs at the legendary Village Vanguard in December of 2002, the modus operandi being to provide only the barest of sketches, leaving plenty of space for interplay and improvisation. The result, Lift: Live at the Village Vanguard , is 76 minutes worth of stretching out that defines what Potter is all about: pure visceral energy balanced with an academic quality that occasionally overwhelms the sheer muscle, but always keeps things interesting.

Each member of the group has an impressive résumé, with dozens of recordings to their credit. Pianist Kevin Hays whet his musical teeth with the likes of Bob Belden and Eddie Henderson; bassist Scott Colley is best-known for his work with Harold Danko and, most notably, Jim Hall; and drummer Bill Stewart first came to attention with John Scofield's in the early '90s, a relationship that has continued to this day with Scofield's latest release, EnRoute . Potter, arguably the most ubiquitous saxophonist of his generation, has worked with everyone from Steely Dan and Paul Motian to Dave Douglas, best known for his long-standing relationship with Dave Holland. Everyone has their own solo careers, so when you put these players together, despite the fact that they are still in their 30s, the level of experience dictates that this will be improvisation of the highest order. And considering that everyone goes back with Potter to his earliest days, there is a certain degree of comfort and coming from the same place that ensures an almost telepathic connection.

On a program of four originals and two covers, Potter demonstrates why he is in such high demand. He can stretch a solo out to great lengths with a virtuosity, musicality and sense of tradition that few can match, liberally nodding to his many influences including Ben Webster and John Coltrane. Like Holland he tends to favour irregular meters in his writing, even taking Mingus' "Boogie Stop Shuffle" and turning it into a 13/4 blues. He understands how to arc a solo, building the excitement to fever pitch before handing the reigns over to others in the group.

What is remarkable about each of these players is how they have managed to develop a voice that may be steeped in tradition, but is nevertheless their own. Stewart and Colley make one of the most elastic yet in-the-pocket rhythm sections around. Hays manages to avoid the most obvious influences and, on the strength of this set, proves himself to be an underrated player deserving broader recognition.

While Potter's sheer technical prowess sometimes threatens to overpower his innate musicality, for the most part he makes statements that are well-conceived, developed and executed. Eschewing the more concept-laden work of his past couple of albums, Lift is a celebration of playing at its most pure.