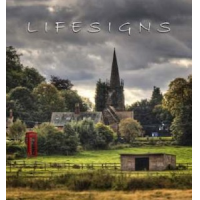 UK-based trio Lifesigns combines expressive soloing, stately overtones and heart-pumping opuses via impressive progressive-pop sensibilities and multi-tiered compositions, hardened by classic prog virtuosity. The band acquires compassionate support from icons, guitarist Steve Hackett (Genesis) and flautist Thijs VanLeer (Focus). Guitarists Jakko M. Jakszyk and Robin Boult (Fish) contribute, yet the listings do not identify the guest musicians on a per-track basis, other than what may appear to be obvious.

Shifting cadences underscore the soloists' sonorous riffing and the band's ethereal interludes. Passive, reflective, and badass tonal swashes are neatly wrapped into a cohesive whole, abetted by resilient melodies and occasional nods to prog's glory days. Make no mistake about it: the musicians impart a prevailing sense of confidence on this auspicious debut, residing on that opaque line where technical acumen and sustainable compositions yield a favorable outcome, enhanced by a glistening audio production that serves the music well.