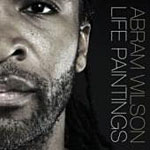 Born in Fort Smith, Arkansas but brought up in New Orleans, where he studied at the Center for Creative Artists—alma mater of fellow trumpeters Wynton Marsalis, Terence Blanchard and Nicholas Payton—Abram Wilson relocated to London in 2002. In 2003 he signed to Dune Records, the recording and management home for a number of significant, London-based, black artists. Life Paintings is his third album for the label.

Wilson's previous disc, Ride! Ferris Wheel To The Modern Day Delta (Dune, 2007), was an ambitious, with-vocals, concept affair featuring a 10-piece band and telling the story of a young man's journey through jazz and hip hop, learning some tough lessons on the way but ultimately finding meaning in his life. Life Paintings is a stripped down, purely instrumental album on which Wilson fronts an acoustic quartet.

The context fits Wilson like a hand-stitched glove, allowing his open-belled, in-the-tradition trumpet to shine center stage. Composed entirely of originals, it's a set on which Wilson's affection for, and reference to, his New Orleans roots is enriched by his own playful approach to writing and improvisation. He's propelled by a hard swinging rhythm section which also includes in pianist Peter Edwards an eloquent second soloist.

The 10 tunes were, apparently, conceived like a collection of pictures portraying different aspects of human experience; which suggests, perhaps, a greater variety of material than is actually contained. Most of the tracks are up-tempo, splattered with growls, smears and blue notes, and are almost unfailingly positive in mood. "Obama," written to celebrate the election of the US's first black president, is among the best, its martial introduction by drummer Graham Godfrey (who solos briefly but excitingly on "Rush Hour"), soon giving way to a joyful stomp.

Wilson's playfulness is winningly expressed on "Rainbows And Fantasies" and "Chasing Mosquito Hawks." The two tunes are intended as snapshots of childhood, and their energy is complemented by a sense of fun conveyed by teetering, Charlie Chaplin- esque, piano motifs supporting the main themes. "Even Though You're Bad For Me" is a slow ballad reminiscent of Hoagy Carmichael's "Star Dust."

Life Paintings doesn't cover ground that hasn't already been well trodden—but it digs deep and it digs with conviction.

From Dusk 'Til Dawn; Rainbows And Fantasies; Even Though You're Bad For Me; Obama; The Eyes Of Belladonna; Snake In The Grass; Chasing Mosquito Hawks; Kiss And Make Up; Rush Hour; Breaking Point.