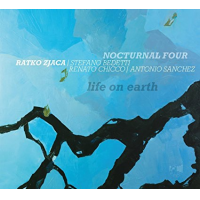 What's in a band name? Sometimes, absolutely nothing; but in this case, a world of truth. Croatian guitarist Ratko Zjaca's Nocturnal Four infuses his music with vespertine vibes and shrouds it in shadows, living up to its name while carving out its own identity on an absorbing program calling to the moonlight.

After forging a bandstand brotherhood through touring with saxophonist Stefano Bedetti and organist Renato Chicco, it was clear to Zjaca that they needed to be part of this project. And to fill out the quartet, he called on one of the his favorite drummers and one of the jazz world's premier musicians: the one and only Antonio Sanchez. Together these four make and snake their way through starry scenes and dangerous scenarios, coming out completely unified and entirely unscathed at the other end.

Certain calling cards reveal themselves early on—Zjaca's penchant for painting sinuous lines and creating angular melodies, a well-blended front line kinship connecting Zjaca to Bedetti, Chicco's preference for organ haze and mist over grease, Sanchez's predictable role as propellant and percussive propagator—but Nocturnal Four doesn't work the same angle from track to track or moment to moment. Opener "Baracoa," for example, paints the group as one to play on noctambulant allure. But that assessment proves to be just a surface observation about ambitions. As the program develops, so too does this band's reach. "Shapes And Light," for example, is built on stronger intentions, demonstrated most clearly in Sanchez's fiery soloing over a vamping outro. Then "There Is No Tomorrow" adopts a cooler flow, giving pause to admire Bedetti's beautifully forthright tenor among other things; "Here Nothing Begins" bounds along, bringing waltz-time fantasy, intoxication, and fire into the frame ; and "Guanajo" flips its own frenzied script, opening with channeled calls from the great beyond before responding in kind with oddball zeal. If that last track was meant to represent life on earth, the extraterrestrials may just tremble with fear.

Zjaca's multi-cultural mix-and-match approach to band-making has always carried risk, but it also seems to continually produce results. In this case, joining these four sympathetic individualists under a starry banner has yielded a multifaceted album that willingly explores everything the night has to offer, be it dynamic, disturbing, or dreamy in nature.

Baracoa; Sense Of Mission; Mind Your Step; Shapes And Light; There Is No Tomorrow; Here Nothing Begins; Guanajo; Finding Our Place; Colours Of Dance.