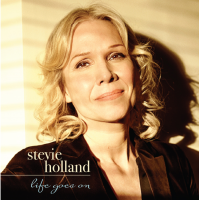 Vocalist Stevie Holland has blazed quite a path for herself. She is fifteen years into a career that has produced seven recordings, the most recent being the present impressionistic Life Goes On. While always refined, Holland takes her refinement to a gilded level that is almost a vapor, an essence. She never overuses her perfectly balanced soprano voice, erring always on the side of sophistication and pure simplicity. Holland approaches ten Gary William Friedman-arranged standards and originals like Matisse beginning his Jazz series.

Holland (and Friedman) transform "Skylark" from a sleepy ballad into a jaunty strut that serves Nicholas Payton tart open bell just fine. It is with no small amount of threat that a warhorse like "Skylark" be given such a facelift. Cut-out bins are crammed with such failed attempts. But Holland pulls it off. Two pieces feature a string quartet: Arlen/Mercer's "Out of this World" and the Hammond/David "99 Miles From LA." The effect is not a "with strings" affair, rather the presence of the strings adds a layer to the impressionism Holland already instills into the classic. James Taylor's "Another Grey Morning" remains very much his creation (like any Paul Simon song, one can hear them from a mile away).

It is "Tea for Two" that contains and displays all of Holland's art. Briskly sardonic, Holland dispatches this standard in such an original manner that her performance joins Anita O'Day's 1958 Newport performance as the modern musical standard. Grace and sophistication rise from this recording like the bouquet of fine wine.

Skylark; Out of This World; Tea for Two; Never; Another Grey Morning; April Snow; Tomorrow’s a Brighter Day; 99 Miles From LA; Not While I’m Around; Life Goes On.