Otherways and Free Space: Life Amid the Artefacts 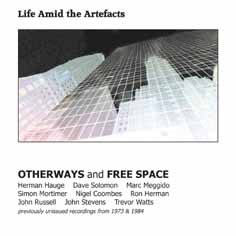 The music of Otherways and Free Space unfurls throughout Life Among the Artefacts at a consistently high crest of improvisation during unselfconscious, unguarded moments when the musicians were, quite simply, being extensions of their instruments. They were forces of nature and allowed the music to tumble freely, incorporating songs which had internal combustion mechanisms that were all their own. As a result, the library of music was enriched when the literature of music and the linguistics of humanity collided. If this seems like a tall order, then the energy that is expelled by brass and winds, the moan and twang and flutter of strings and the dramatic rumble of percussion will negate the feeling of overstatement. Rarely was music so unsung or made with such passion, and it can only be attributed to almost nonchalant mysticism and an unabashed disregard for the trappings of industrial and commercial happenstance.

Herman Hauge's visceral horn plays beautifully, across John Stevens' brazen corne and Trevor Watts' fiery yet unconscious, contrapuntally slicing soprano horn. The music of "Intermediate" has a sharpened sense of mortality, so that the twin double-basses pulsate and throb with heartfelt sonic dissertations, while the percussion bobs and weaves like a medieval sorcerer, coloring the music with lurid invention. The sense that all of this is driven by human compunction to extend language and not some abstract amorphous event is real and felt deep within the soul. The seeming magic and mystic reality of this piece carries over from the octet versions of the ensemble into the quintet also fronted by Hauge.

Here, in as rapid a succession as the quantum energy of each musician will allow, the music rapidly reintegrates ideas with raw emotion. While this appears formless, once again, the nude powers of the works appear to follow a schematic that is like Dadaist sculptures—molten and mobile. The high point is "Unarmoured," in which philosophy appears to drive Hauge and his ensemble's ideation. This is as close to the elasticity of pure jazz as this music can possibly get. Hauge describes it as occasions when defenses are lowered and the sound that emerges makes lives worth living. In a "flat-lining" sort of way, without being too bloody-minded about it, this music unwinds with the power of being on the edge of mortality with no safety net; a high wire act where the performer is left completely at the mercy of that point where his instrument and his ideas collide.