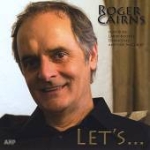 On the heels of his recently released The Dream of Olwen (Self Produced, 2010), it is worth considering Roger Cairns' previous recording, Let's..., which was a nice evolution from his first American release, A Scot in LA (Self Produced, 2006).

Roger Cairns is a student of The Great American Songbook. Rather than wearing out "My Funny Valentine" or "My Foolish Heart," he often chooses the lesser-known of the canon, and delves deeply into the pop realm. He has the chops to do so and his greatest offering is a light, friendly voice, full of sincere humor and glee in singing. Cairns oeuvre comprises balladic love songs, though he can rip a perfectly acceptable blues when he wants to ("Stormy Monday"). "Let's Fall in Love," "They Say It's Wonderful, and "Moonlight Becomes You" all are Cairns' bread and butter.

Cairns' name commands such talent as guitarist Larry Koonse and drummer Roy McCurdy to join him, as well as his musical soul mate, pianist Gary Fukushima. Cairns attracts musicians with his same gentle approach to performance. No one is burning things up showing off technique and style. Talent and humility are in abundance, and the combination makes for an enjoyable vocal outing, one that presents its material as originally intended. The quest to understand The Great American Songbook during its creation must start somewhere and it is here.

But Cairns also has a wicked sense of humor that he exposes on the playful "Bye, Bye (Peter Gunn Theme)" and "Gravy Waltz,," both a credit to his looking far and wide for an impressive repertoire. He closes with John Sebastian's "Daydream," tipping a hat to his rich Scottish sense of humor. The song begins straight, but in an off-key Thelonious Monk fashion that rapidly devolves into a dissonant and dysfunctional counterpoint one would expect of J.S. Bach after going on a weekend bender. Roger Cairns is a vocalist deserving much wider recognition.

Let's Fall In Love; They Say It's Wonderful; Bye, Bye (Peter Gun Theme); Get Set For The Blues; To The Ends Of The Earth; How Am I To Know; Moonlight Becomes You; Gravy Waltz; The Face I Love; My One And Only; Things Are Swinging; Pretty Butterfly; If Love Were All; Stormy Monday; Sans Souci (Cyprus); Daydream.