BY JACK BOWERS
November 1, 2017
Sign in to view read count 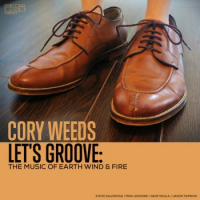 When last heard from, Canadian Cory Weeds was wielding a mean neo-swing tenor saxophone with the superb Jeff Hamilton trio on the albums Dreamsville and This Happy Madness. On Let's Groove: The Music of Earth, Wind & Fire, Weeds moves from tenor to alto (with no loss of merit) alongside tenor and fellow Canadian Steve Kaldestad, Hammond B3 maestro Mike LeDonne, guitarist Dave Sikula, drummer Jason Tiemann and (on four tracks) percussionist Liam MacDonald.

This is the third Weeds / LeDonne collaboration, the first two having surveyed the music of boppers Hank Mobley and Jackie McLean. Make no mistake, this latest alliance espouses a funky R&B groove, in keeping with EW&F's temperament, but one that seems to suit the ensemble well. If there's a weakness in that blueprint it is that much of the music, as far as rhythm and tempo are concerned, is complementary; that is to say, the variations are as a rule so spare as to be immaterial. There is one ballad ("Imagination") and an Afro-jazz burner ("Kalimba") that veer somewhat away from the requisite design, but they are the exception.

The end result does show that almost any form of music, R&B included, lends itself under the proper circumstances to an agreeable jazz rendition. The hallmarks in this case include accomplished and versatile musicians who give the music its due, embracing the spirit of the original themes while giving them a jazzier spin that serves to enhance their immanent charm. Weeds and Kaldestad comprise an impressive front line, while LeDonne and his comrades provide a taut and unbending rhythmic backdrop.

Those who are familiar with EW&F may recognize some (or all) of the tunes on offer, most of which are under the sway of LeDonne's forceful Hammond organ (which obviates the need for bass or piano) and enfold cogent solos by Weeds, Kaldestad, Sikula and Tiemann, as well as by LeDonne himself. For those who savor rhythm that is spiced with blues, this is a generally pleasurable session that should set your toes to tapping as you groove along with Weeds and his open-hearted quintet / sextet.

Let’s Groove; Getaway; Devotion; You and I; The Way of the World; Imagination; Shining Star; Kalimba; After the Love Is Gone.