Willie Nelson and Family: Let’s Face the Music and Dance 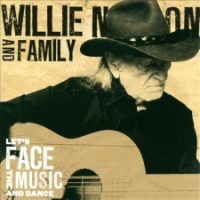 While it is an apologia for Willie Nelson, at 80, he has more than earned the right to do as he damn well pleases when he records. When Ray Charles passed away in 2004, Nelson was the only American musician to possibly accept the Charles mantle of musician with the greatest depth and breadth, having had an immeasurable impact on American music.

Having composed country standards like "Crazy," "Hello Walls" and "Funny How Time Slips Away"—recording the influential concept album Red-Headed Stranger (Columbia, 1975) and the successful crossover discs Stardust (Columbia, 1978) and Over the Rainbow (Columbia, 1981)—Nelson has fairly well made himself a genre all his own, one that melds country, jazz, pop and folk musics into a mercury-malleable form defined by his distinctive voice and guitar style.

Let's Face the Music and Dance is a mixed bag of styles and genre all poured through the filter of the Nelson family's combined musical experience. Nelson's laconic, behind-the-beat singing is as informed as ever and his guitar playing has done nothing if not improved throughout his long career. The disc's title cut is delivered with a softened Bossa Nova edge, Nelson's voice quiet and warmly insinuating.

Nelson's jazz bones show up in the standards "I Can't Give You Anything But Love" and Django Reinhardt's "Nuages." He hits the rockabilly with Carl Perkin's "Matchbox" while "I'll Keep On Loving You" is his C & W offering. With support by sister Bobbie and son Micah and his longtime harmonica player Mickey Raphael, Nelson shows he still has a creative thing or two up his sleeve.

Let's Face the Music and Dance; Is the Better Part Over; You'll Never Know; Vous Et Moi; Walking My Baby Back Home; Matchbox; Twilight Time; I Can't Give You Anything But Love; I'll Keep On Loving You; I Wish I Didn't Love You So; South of the Border; Nuages; Maria (The Dawn Is Breaking); Shame On You.