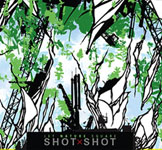 Shot x Shot is an acoustic quartet comprised of twenty-something graduates of the University of the Arts in Philadelphia, PA. Their sophomore effort, Let Nature Square, is their first studio recording, following their highly acclaimed 2006 live, self-titled debut on High Two.

Scofield and Rogers unveil an expressive lyricism drawn from Ornette Coleman's vocalized intonation and the regal solemnity of mid-period Coltrane. Avoiding conventional archetypes and histrionic outbursts, they often play in tandem, intermeshing with sympathetic accord and balanced dynamics as they complement and contrast each others circuitous statements. Their serpentine cadences on "Scans" veer from robust and assertive to tender and reserved. "Overlay" demonstrates their full range; working pointillist textural accents into variations on an understated melody, they ascend from cascading euphony to bristling ardor.

Engle and Capecchi modulate fluidly between pneumatic grooves, complex metric patterns, limber rubato pulses and colorful accents. At their most unified they drive the angular "Triple Double" with a mutable funk vamp, relegating the horns to a supporting role. Demonstrating their conversational acumen, bass and drums spar sans horns through the final half of "Scans."