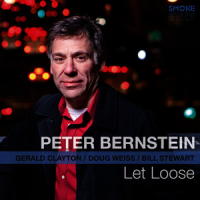 When it comes to guitarists of his generation, Peter Bernstein stands head and shoulders above the crowd. His tone and melodic approach are so recognizable as to be detected in a just a few bars. Since 1989, he has been the go-to guitarist in New York City and has literally graced hundreds of recordings. Bernstein has also issued about a dozen of his own albums over the last twenty-five years, done in various formats for a variety of small labels. His debut for Smoke Sessions, Let Loose seems to distill all his experiences and expertise into a package as fine as a well-aged Bordeaux.

It should come as no surprise that Bill Stewart would hold the drum chair for this quartet recital, he and the guitarist going way back to their time spent in the organ trio of Larry Goldings. The opening "Let Loose" finds Stewart wailing away on those displaced triplets that are part and parcel of his sound. It sets a mellow groove exploited by pianist Gerald Clayton's vamp figure, it in turn supporting Bernstein's signature single-note riffs. By contrast, the tempo is up and swinging on "Hidden Pockets," another Bernstein original with some great changes and a perky solo from Clayton. Not to be left behind, Stewart trades bar with Bernstein and rattles off some cliché-free runs that are as far from rote as it gets.

Tenor saxophonist Hank Mobley once commented that his tone was somewhat of a "round sound." The same can be said for Bernstein. He uses minimal processing and his hollow-body electric speaks with maximum clarity. On several occasions, Bernstein has spoken about his preference for horn players and fine jazz singers. His single-note runs often reflect this penchant. The slower material such as "Resplendor" and "Lullaby for B" bear our these points and display Bernstein's amber tone. Think of the sound of a fine tube amplifier or the taste of a mellow Chardonnay and you get the idea.

One of the great Woody Shaw's most valued compositions, "Sweet Love of Mine," first debuted on Jackie McLean's 1967 Blue Note set Demon's Dance. Bernstein and company find fodder of their own with this chestnut, particularly Clayton, who delivers one of his best solos of the date. His angular runs and chunky blocks chords contrast nicely with Bernstein's more linear approach.

Although his efforts might be taken for granted, bassist Doug Weiss locks in tightly with Stewart, making for some seamless support. He also has a few choice spots of his own, including the lovely statement on "Blue Gardenia." A brisk run through "This Is New" caps off this excellent set. Also worthy of mention is that Bernstein has opted to go for fewer tunes that he develops at length, as opposed to a program packed with a dozen or more short numbers. It would be nice if this started a trend that others picked up on.

Let Loose; Resplendor; Hidden Pockets; Tres Palabras; Cupcake; Lullaby for B; Sweet Love of Mine; Blue Gardenia; This is New.