By CHARLIE B. DAHAN
September 4, 2007
Sign in to view read count 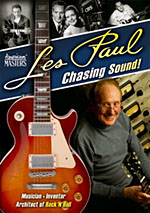 I dare anyone to spend the time to find one musician who can say they have not had their musical career influenced by Les Paul. Maybe they aren't aware of his career as a country and jazz great, but if they play guitar, record or listen to music from the last 50 years, they have been touched in part by the master, the wizard, himself, Les Paul. One might be able to extend inevitability to anyone who listened to music in the last half century. Can that be said about any other musician or person for that matter?

Koch Vision released a 90-minute documentary of the life and times of Les Paul on August 14th from the renowned PBS series American Masters. Just as one would expect from this highly regarded series, it contains a complete and accurate portrayal of Les Paul, his life, music and achievements The presentation covers his childhood as a tinkerer, his time in New York, Chicago and Los Angeles developing his music career and the stories about his perfection of multi-track recording, the relationship with Gibson to produce his solid-body electric guitar and finally his weekly Monday night gig at the Iridium in New York City. The presentation possesses all the ingredients of entertainment and information to make the hour and a half program feel like it has lasted only a handful of minutes

Having watched many documentaries in my career, I can easily say that this one ranks as one of the best, owed in large part to Paul and his willingness to comment on all facets of his life in the most candid of fashions. My hope was that the presentation would have lasted longer as it was most engaging and fascinating. I kept saying to myself that it is one thing to be the best in a creative field, but to also have such technological curiosity and accomplishment raises questions of about the brain that worked that way. We may never know the "how" but the evidence of the "what" exists in this DVD.

American Masters Les Paul: Chasing Sound provides a trifecta of entertainment, education and inspiration in one 90-minute package. In addition to the original PBS presentation, this DVD package contains bonus footage of a full-length Les Paul performance at the Iridium with is trio, vintage cuts of Paul playing with Keith Richards, Kay Starr, Merle Haggard and Chet Atkins, and classic television appearances, including great cuts with Mary Ford and extended interviews and photos of Les Paul.